An actor out of Riverside, California, Garrett Richard Wang (born 15 December 1968; age 51) is most famous for his role as Ensign Harry Kim on Star Trek: Voyager.

Several costumes and uniform components worn by Wang during the run of Star Trek: Voyager were sold off on the It's A Wrap! sale and auction on eBay. [1]

Wang's first schooling was in Bermuda, after which he moved back to the US at the age of nine. Graduating from Harding Academy High School in Memphis, Tennessee, he studied at UCLA, where he began to major in Asian studies until a theater instructor there convinced him to pursue acting. He began performing in a number of productions, and continued to do so after graduating.

In 1997, he was chosen by People Magazine as one of the "50 Most Beautiful People in the World". And in 2001, E! (Entertainment Television) selected Wang as one of the "20 Coolest Bachelors" in the country.

Wang is also a fan of Star Trek: Deep Space Nine. In an interview with TV Zone magazine in 1998, he stated his favorite episodes as being "Far Beyond the Stars", "Little Green Men", "Our Man Bashir", and "Trials and Tribble-ations".

While not an official participant of the ceremony, Wang was the only main actor of any Star Trek series to attend the closing ceremony of Star Trek: The Experience in Las Vegas on 1 September 2008.

Wang is of Chinese descent. His Chinese name is 王以瞻 (Wang Yizhan or Wang Yi Chung), translating to "One who is admired by many". His last name is pronounced "wong".

During the hiatus between Voyager's third and fourth seasons, Wang was rumored to be written out of the show, at the start of its fourth season or shortly thereafter. He later admitted, "There was definitely concern on my part [....] Had they decided not to bring Harry back, it would not have been the end of my world, just as Jennifer's leaving is not the end of her world [....] Of course, nobody likes to be dropped from a show." Wang was not entirely sure why the producers decided to keep him in the series, but suspected that several factors were responsible. "In terms of what happened during that span of time, I'm not even going to ask," Wang said. "Demographic-wise, Kim plays to an audience that other people don't play to. You're also getting into a little sticky area with the ethnic issue. On top of that, it was a coup that I got into People Magazine [as one of the world's 50 most beautiful people]. I think Patrick Stewart was the only other person from the Star Trek world to get in. The timing of that, right during our hiatus, certainly couldn't have hurt me in terms of them keeping me on the show." (The Official Star Trek: Voyager Magazine issue 17, p. 37)

Wang had strong criticisms of Voyager co-creator and executive producer Rick Berman. During a chat with the website GeeksOn.com, Wang claimed Berman had visited the set of Star Trek: Voyager only twice in seven years, called him "an idiot" and made the claim that "if there is a hell in this existence that we have that people can go to, he's first on the list." [2] Wang was also the first Star Trek actor to be denied a chance to direct the show. [3]

Since 2010 Wang has been director of the Star Trek track of the popular Dragon Con science fiction convention that takes place in Atlanta on the Labor Day weekend.

Wang landed his first television appearance in 1994, co-starring with Margaret Cho in an episode of her short-lived sitcom All American Girl (with Clyde Kusatsu as her father). That same year, he was signed aboard Star Trek: Voyager.

Outside of Voyager, Wang also appeared in a number of independent films and short subjects, including Angry Cafe (1995, with France Nuyen), Hundred Percent (1998), and Ivory Towers (1998, with Time Winters). He also appeared along with Star Trek: Deep Space Nine star (and "Caretaker" co-star) Armin Shimerman and Star Trek: Enterprise star Dominic Keating in the 1999 comedy The Auteur Theory. He more recently starred in the B-movie horror Demon Island. In 2005, Wang appeared in the epic television Western mini-series Into the West, playing the role of Chow-Ping Yen. Fellow Star Trek performers Keith Carradine and Clayton Rohner were also a part of the series' cast.

Wang can be seen briefly in the video for the Rage Against the Machine song "Sleep Now in the Fire." The band's guitarist is none other than Tom Morello, who made a cameo appearance on Star Trek: Voyager.

Wang recently shot an independent comedy with Star Trek: Enterprise star Anthony Montgomery called Why Am I Doing This?.

On May 8, 2014, Wang revealed on his Twitter feed that Jonathan Ke Quan, best known for portraying the character "Short Round" in the 1984 blockbuster Indiana Jones and the Temple of Doom, was seen coming out of the same audition room Wang was at where others were trying out for the role of Harry Kim.

On August 2, 2014, it was revealed that he would reprise his role as Harry Kim for the video game Star Trek Online's second expansion, "Delta Rising", alongside fellow Voyager alumnus Tim Russ. 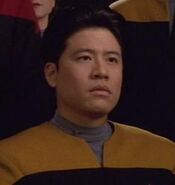 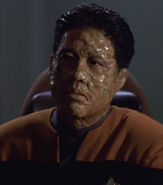 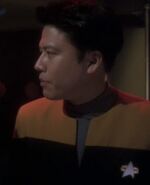 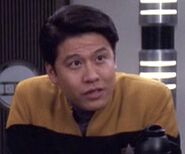 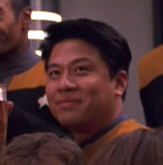 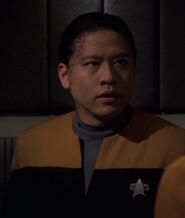 Retrieved from "https://memory-alpha.fandom.com/wiki/Garrett_Wang?oldid=2416704"
Community content is available under CC-BY-NC unless otherwise noted.