Released on the occasion of the 50th anniversary, the set was initially issued in July as exclusives for the Region B UK-only retailers ZOOM and Zavvi, though British retailers HMV and Amazon.co.uk shortly thereafter later carried the set as well, as did the Italian Amazon.it as import. (ASIN B06W2M4PY9)

A German Region B version followed suit the following month, as a to 500 numbered copies limited exclusive for retailer Media Markt, even though it was initially slated for a December release. [1] The only known Region A release was a Japanese one, issued by a local retailer in September. The German and Japanese box art was very similar to the one as issued in the UK, save for the foreign language text imprints on the back of both boxes and the individual steelbooks. The German set though, was slightly longer in order to make room for a T-shirt and a 50th anniversary pin, which were included as bonus gifts. [2] The German box title was also changed to Limited Edition Blu-Ray Steelbook 10 Movie Star Trek Collector's Box, the preliminary promos notwithstanding. The Japanese box too, was somewhat differently executed than the UK one, as a hardboard slipcase – contrary to the UK and German lid closed soft-board ones – with its title reading, Limited Edition Steelbook 10 Movie Star Trek Collector's Set. 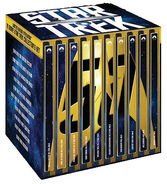 During the early advertisement campaign, especially by Zavvi, [3] there had been considerable confusion on which version of Star Trek: The Motion Picture was included, as the early released imagery showcased the cover art of Star Trek: The Motion Picture (The Director's Edition), getting the hopes up of fans, which were squashed though a short while later when it was revealed that "the studio marketing artist who created that shot simply used the wrong cover art for the film". [4] Subsequent advertisements were adjusted accordingly.

On the other hand, initially assumed to be the original 2009 Star Trek II: The Wrath of Khan Blu-ray release due to its generic cover art, [5] customers later confirmed that it was actually the Star Trek II: The Wrath of Khan (Director's Cut) that was included, which was as a matter of fact only just released the month before for the first time in region A, and coinciding on the same date with the regular UK Region B release. [6] [7] [8]

Despite starting out as an exclusive, all films saw concurrent European general, non-limited retail individual releases in the UK, Germany, Italy, and France, the steelbooks typically packaged in transparent plastic slipcases with the usual Blu-ray band imprinted. In all cases the back of of the steelbooks were language adapted. Ironically, and while the cover art was in the UK adjusted to the right one afterwards, the German (ASIN B01JJ933BA), French (ASIN B01FV3FLTU), and Italian (ASIN B01F3SKQTI) individual The Motion Picture releases were still being marketed featuring the wrong cover art. Japan incidentally, saw no individual releases – nor did any other Region A country for that matter – , though imports were featured on its Amazon.co.jp site.

While in some cases marketed as region-restricted, this release is in actuality region-free as this has increasingly become commonplace for the Blu-ray format. (ASIN B01N9QB6LI)

The disc contents were identical to the individual ones previously released. Please refer to the following entries for the respective discs' arrangements,