Real World article
(written from a Production point of view)
For information about 2021 in the fictional Star Trek universe, please see 2021.

Note: If you followed this link from an article referring to a production occurring on or after 4 March 2021, the information hasn't been moved here yet – it is still listed at upcoming productions.

"That Hope Is You, Part 2" and aftershow 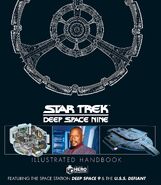 Retrieved from "https://memory-alpha.fandom.com/wiki/2021_(production)?oldid=2724036"
Community content is available under CC-BY-NC unless otherwise noted.