Returning to a planet last visited by an Earth ship 100 years earlier, the Enterprise finds a planet that has based its culture on the Chicago gangsters of the 1920s.

The landing party surrenders its standard phasers and communicators and are asking questions of the gunmen when a drive-by shooting occurs. One of the gunmen is killed; the other refers to the "hit" being committed by someone named Krako. Kirk, Spock, and McCoy are taken to Okmyx's office, where they learn that Okmyx is one of a dozen or so "Bosses" and that he has the largest territory on Iotia. The office contains a book (referred to as "The Book") published in the year 1992 titled Chicago Mobs of the Twenties. Okmyx informs Kirk, Spock, and McCoy that "The Book" was left by the crew of the Horizon, and the landing party correctly deduces that the entire Iotian culture has been formed by "This Book". Okmyx refers to the landing party as "Feds" and tells them he wants the Enterprise to furnish him with "heaters" so he can wipe out all of the other bosses and take total control of the planet. Kirk refuses and Okmyx gives him just eight hours to provide the weapons or die.

"Okay, you three, let's see you petrify."
"Sir, would you mind explaining that statement, please?"
"I want to see you turn to stone. Put your hands over your head, or you ain't going to have no head to put your hands over." 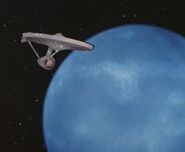 …and its remastered counterpart
Add an image to this gallery

Retrieved from "https://memory-alpha.fandom.com/wiki/A_Piece_of_the_Action_(episode)?oldid=2448399"
Community content is available under CC-BY-NC unless otherwise noted.