The following is a list of personnel assigned to Ah-Kel's raider in 2369.

These two Humans were part of the raider's crew. They accompanied Ah-Kel during the block of the security office entrance after Ro-Kel was killed. (DS9: "Vortex")

Both crewmen were played by background performers.
According to the script they were Gatherers. 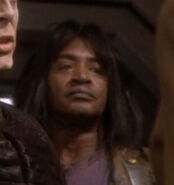 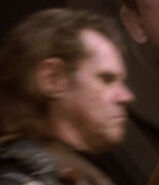 This Tailhead was a crewman aboard the Miradorn raider, commanded by the Miradorn twins Ah-Kel and Ro-Kel. He was part of the crew who blocked the entrance of the security office after Ro-Kel was murdered by the Rakhari Croden. (DS9: "Vortex")

This tailhead was played by an unknown performer.

According to the script of the episode there were four crewmembers with Ah-Kel during the block of the security office entrance, two gatherers and a pair of "weird-looking" aliens. In the episode there was only a brief view on three of the members, two of them blurry in the background.

The DS9 Season 1 DVD special feature "Michael Westmore's Aliens: Season One" featured a photography of all four crewmembers, including the clear shot of the tailhead and also the second, unnamed alien.

Retrieved from "https://memory-alpha.fandom.com/wiki/Ah-Kel%27s_raider_personnel?oldid=2398365"
Community content is available under CC-BY-NC unless otherwise noted.