During the V'ger crisis of the mid-2270s, Rear Admiral James T. Kirk was a passenger on air tram 3 that traveled to San Francisco. He was heading to a meeting with Admiral Nogura in a bid to get the USS Enterprise back. While at the air tram station, he met Commander Sonak, who was intended to serve as science officer on the forthcoming mission. Meanwhile, a Class F shuttlecraft was also at the station, preparing for departure. There were also several Federation ambassadors at the station. (Star Trek: The Motion Picture)

A diagram of the creation of the air tram station's interior 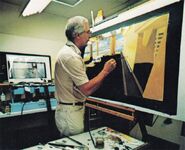 Yuricich creating the matte painting for the air tram station

Before the design of the air tram station was finalized, an alternative idea for the facility's appearance was illustrated in a conceptual sketch. This concept artwork showed a station that looked similar to a subway station and was less dramatic than the enormous plaza that was constructed for Star Trek: The Motion Picture. (Star Trek: The Magazine Volume 2, Issue 8, p. 99)

The on-screen depiction of the air tram station additionally involved a matte painting, as background enhancement for the live-action sets, created by Matthew Yuricich. (The Making of Star Trek: The Motion Picture, color inset) This painting was in addition to model elements of the flying air tram and lighting effects. The air tram station ended up as the most complicated optical matte shot in The Motion Picture (even considering the film's relatively complex-looking [[V'ger]] sequences). "That shot turned out to be a nightmare," Douglas Trumbull complained. "It took us weeks to perfect it." (Star Trek Monthly issue 49, p. 38)

Views of the air tram station were digitally altered by Foundation Imaging in 2001, for the Star Trek: The Motion Picture (The Director's Edition) DVD release. Prior to the release of that production, an unused version of the facility's exterior was portrayed in test footage for the project, which Daren Dochterman created to exhibit the ways new footage could be added to the film. In the ultimately revised version of the station's interior, Dochterman altered a large wall on the facility's right-hand side; he specifically replaced the wall's upper half with an additional platform, from which a Class F shuttlecraft could be seen taking off, it being Foundation's subtle homage to Star Trek: The Original Series where the shuttlecraft had been regularly featured. (Star Trek: The Magazine Volume 2, Issue 8, p. 53; Star Trek: The Motion Picture (The Director's Edition), audio commentary)

Retrieved from "https://memory-alpha.fandom.com/wiki/Air_tram_station?oldid=2443793"
Community content is available under CC-BY-NC unless otherwise noted.