An aircar was a type of automobile designed for travel in the air. It was distinguished from other types of cars that drove on the ground, without any antigravs, and also from the hovercar, a similar vehicle limited to hovering over the ground; an aircar could take flight at much higher altitudes. Also, at least some aircars had wings.

When Captain Archer was brought back ten months to his apartment by Daniels, he looked out his window into the city and saw aircars flying by. (ENT: "Shockwave")

In Paris in the year 2257, a number of aircars were flying in the sky when Michael Burnham was told about her pardon from the President of the United Federation of Planets by Sarek. (DIS: "Will You Take My Hand?")

In 2259 of the alternate reality, outside the apartment window of Thomas and Rima Harewood, an aircar could be seen flying in the distant London skyline. (Star Trek Into Darkness)

In the alternate reality, an aircar flew over Starfleet Headquarters when Kirk and Spock reported to Admiral Pike following the incident on the planet Nibiru. A few aircars could also be seen outside Pike's office window. (Star Trek Into Darkness)

In the alternate reality, when Khan Noonien Singh was preparing his blood to send to Thomas Harewood, a number of aircars were visible in the London city skyline. (Star Trek Into Darkness)

When Thomas Harewood went to the Kelvin Memorial Archive to blow it up, a couple aircars were in the sky nearby. (Star Trek Into Darkness)

When Kirk and Pike went to Starfleet Headquarters, a number of aircars were flying by in the San Francisco skyline. One could also be seen from the window outside the Daystrom Conference Room, and after Pike's death, one flew by outside Kirk's apartment. (Star Trek Into Darkness)

In 2259 of the alternate reality, after John Harrison attacked the Daystrom Conference Room with a jumpship, some police aircars converged on the scene at Starfleet Headquarters. (Star Trek Into Darkness)

In the alternate reality, when Montgomery Scott was at the Port of San Francisco bar with Keenser, an aircar could be seen flying over the water near the building. (Star Trek Into Darkness)

In the alternate reality, while Spock and Khan were engaged in combat on a garbage barge flying down a skyway, a few aircars could be seen flying by. (Star Trek Into Darkness)

In 2364, when Jean-Luc Picard was visiting a holographic recreation of the Café des Artistes on the Enterprise's holodeck, a couple of aircars could be seen in the Paris skyline. (TNG: "We'll Always Have Paris")

An aircar in flight over Paris in 2257

An aircar flying over Starfleet Headquarters

An aircar over London 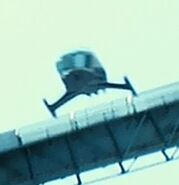 An aircar in flight above the Kelvin Memorial Archive

An aircar at the Port of San Francisco

An aircar flying over Khan in San Francisco

An aircar in flight over San Francisco.

An aircar thoroughfare with aircars and a garbage barge

Aircars in flight in Paris

An aircar in Greater Boston 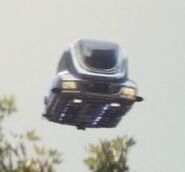 An aircar flying over Starfleet Headquarters 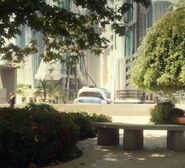 An aircar parked on the ground 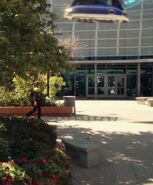 An aircar flying over Raffi Musiker

The name "aircar" has never been stated in canon, but it is taken from multiple non-canon sources. While hovercars were designed for near-ground travel, an aircar could be useful for higher altitudes. Even though the name itself wasn't used on screen, vehicles matching the description of the non-canon aircars were shown.

According to non-canon sources, aircars were also common on Betazed, Ferenginar, Qo'noS, and in the Orion constellation.

In FASA's Star Trek RPG, one particular design of an Orion aircar was able to fly at 160 kilometers an hour. It had a pressurized cabin for travel over tall mountains, and could carry ten passengers.