Pomet
Yranac
Takarian sandal maker
Lumas
Alan Altshuld is an actor who appeared as four different alien characters in two episodes of Star Trek: The Next Generation and two episodes of Star Trek: Voyager. For the episode "Day of Honor", he filmed his scenes on Monday 30 June 1997 and Tuesday 1 July 1997 on Paramount Stage 16. His costume from this episode was later sold off on the It's A Wrap! sale and auction on eBay. [1]

One of Altshuld's early roles in the movie business was the role of a Volkswagen driver in the 1986 comedy The Money Pit, which also features Star Trek performers Mike Starr and Tzi Ma. The following years he had guest roles in the television series The New Adam-12 (1991, with Peter Parros), Dr. Quinn, Medicine Woman (1994, with Joe Lando, Chad Allen, Erika Flores, Barbara Babcock, Frank Collison, and Hélène Udy), Baywatch (1994, with Joni Avery), Tracey Takes On... (1997, with Seymour Cassel and Michelle Johnston), and G vs E (1999, with Clayton Rohner and Googy Gress). 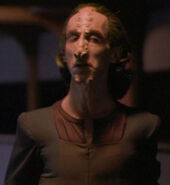 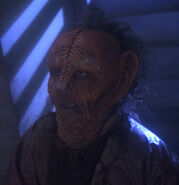 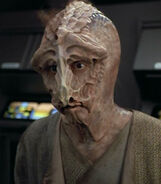 Lumas
VOY: "Day of Honor"
Add an image to this gallery

Retrieved from "https://memory-alpha.fandom.com/wiki/Alan_Altshuld?oldid=2525543"
Community content is available under CC-BY-NC unless otherwise noted.