Mendak; Tokath; Augris
Alan Scarfe (born 8 June 1946; age 75) is a British actor who appeared in two episodes of Star Trek: The Next Generation and in an episode of Star Trek: Voyager.

Scarfe was the first actor who was cast and filmed scenes as Kazon-Ogla First maje Jabin for the Star Trek: Voyager pilot episode "Caretaker". He filmed his scenes on Tuesday 13 September 1994 on Paramount Stage 9, representing the Kazon bridge set. the role was later re-cast with actor Gavan O'Herlihy who also re-filmed Scarfe's scenes.

For the Voyager episode "Resistance", Scarfe filmed his scenes on Friday 22 September 1995 and between Tuesday 26 September 1995 and Friday 29 September 1995 on Paramount Stage 1, 8, and 16. Parts of his costume from the episode "Birthright, Part II" were later sold off on the It's A Wrap! sale and auction on eBay. [1]

He had been married to "Lursa" actress Barbara March between 1979 and 2019 when Barbara died after battling cancer. The couple had a daughter, Antonia Scarfe. He was previously married to actress Sara Botsford with whom he has a son, actor Jonathan Scarfe. He is a former Associate Director of the Stratford Shakespeare Festival in Ontario, Canada and the Everyman Theatre in Liverpool.

Scarfe is probably best known for starring role as Dr. Bradley Talmadge on the television series Seven Days (1998-2001, with Norman Lloyd) and as Arch Magus in the miniseries Legend of Earthsea (2005). He also had a memorable guest appearance in the seaQuest DSV episode "Games" (1993) alongside Star Trek alumni Stephanie Beacham and Marco Sanchez. His character, Dr. Rubin Zellar, was eventually mass-produced as an action figure for the seaQuest DSV line by Playmates Toys. 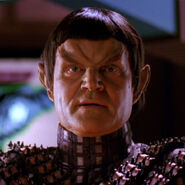 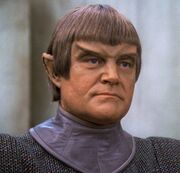 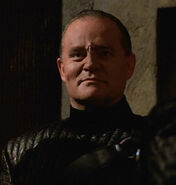 Augris
VOY: "Resistance"
Add an image to this gallery

Retrieved from "https://memory-alpha.fandom.com/wiki/Alan_Scarfe?oldid=2741165"
Community content is available under CC-BY-NC unless otherwise noted.