Leland;
see Additional Characters
Alan van Sprang (born 19 June 1971; age 50) is a Canadian actor who portrayed Leland in the second season of Star Trek: Discovery, as well as in a bonus scene from the first season finale, "Will You Take My Hand?". [1] He later portrayed Control after this character possessed Leland's body in "Perpetual Infinity".

To prepare for his role, Van Sprang watched the Star Trek: Deep Space Nine episodes where Section 31 were introduced. [2]

Born in Calgary, Canada, van Sprang has been acting in films and television since 1994. He is best known for his portrayal of Sir Francis Bryan in the historical drama series The Tudors (2009), where his co-stars included James Frain and Annabelle Wallis, and for his role of King Henry in another historical show, Reign (2013-15). He also played the character Valentine Morgenstern on the supernatural / horror series Shadowhunters: The Mortal Instruments between 2016 and 2019. 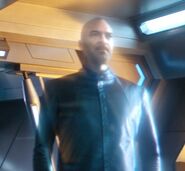 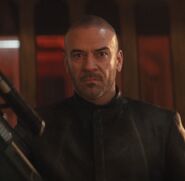