Albie Selznick (born 1 January 1959; age 62) is an actor and movement artist and coach who appeared in three episodes of Star Trek: The Next Generation and Star Trek: Voyager. He also worked as choreographer for the Ventu movements in the Star Trek: Voyager episode "Natural Law". Selznick filmed his scenes for his first Trek role in "Cost of Living" on Wednesday 12 February 1992 and Thursday 13 February 1992 on Paramount Stage 16 where his makeup was applied by makeup artist Gerald Quist. His costumes from the episodes "Cost of Living" and "Macrocosm" were sold off on the It's A Wrap! sale and auction on eBay. [1] [2] For both of his Voyager appearances, Selznick was trained by voice/dialogue coach Emmerson Denney. [3] 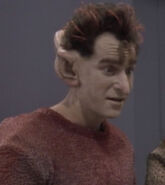 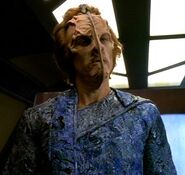 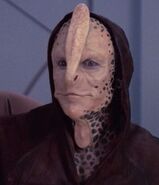