Aldebaran whiskey was a strong, green alcoholic beverage, favored by Guinan, who kept a bottle behind the bar in Ten Forward. It was a gift from her friend, Jean-Luc Picard.

In 2369, Data served Montgomery Scott the drink of Aldebaran whiskey, although he was unsure of its characteristics beyond its green color. Scotty found this beverage quite satisfying and drank most of the bottle himself, although he shared a couple of glasses with Picard. (TNG: "Relics")

In 2371, Quark discovered an empty bottle of Aldebaran whiskey in his brother Rom's room that was taken from Quark's "private stock." (DS9: "Prophet Motive") 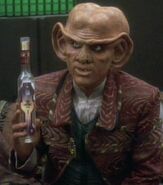 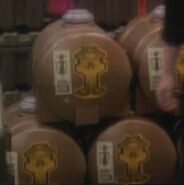 Barrels of Aldebaran whiskey
Data's description of the whiskey in "Relics" of "it is green" was a nod from episode writer Ronald D. Moore to Scotty's same description of a drink to the Kelvan Tomar in "By Any Other Name". (Star Trek Encyclopedia (3rd ed., p. 6))
The green drink seen in "In a Mirror, Darkly, Part II" was another "tip of the hat" to the green drink seen originally in "By Any Other Name". (ENT Season 4 DVD audio commentary)