Romulan guard; Holographic GI
Alexander Denk (born 23 February 1968; age 53) is an actor, stuntman, and fitness expert who portrayed a Romulan guard in the Star Trek: Deep Space Nine third season episode "Improbable Cause". As a background performer Denk received no credit for his appearance. [1] He later appeared in the Star Trek: Voyager fourth season episodes "The Killing Game" and "The Killing Game, Part II" and is listed on the call sheets of the episodes.

Denk attended the Vienna-Austria College and the Hotel School for Professional Chefs. He has a master in nutrition-cooking and a background in bodybuilding, weight management, and physical therapy. Denk won several awards and titles in these disciplines between 1997 and 2003, such as "Mr. Vienna-Austria" in 1988, "Mr. Natural Universe" in 1997 and 2002, and "Mr. World Musclemania" in 2002. [2] [3] As a certified chef and nutrition expert, Denk is the spokesman for the company "4 Today", a nutritional supplement company.

Denk was the bodyguard for late actress and model Anna Nicole Smith and was also up for the role of her daughters father in the trial after Smith's death. [4] [5] Denk previously worked for Smith on her reality show The Anna Nicole Show (2002). He also auditioned for the reality show America's Next Fitness Star. [6] 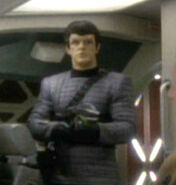 Retrieved from "https://memory-alpha.fandom.com/wiki/Alexander_Denk?oldid=2701633"
Community content is available under CC-BY-NC unless otherwise noted.