Alexander Philip Enberg (born 5 April 1972; age 49) is the actor best known to Star Trek fans for his recurring role as Ensign Vorik on Star Trek: Voyager. Enberg is the son of Star Trek: The Next Generation and Voyager producer and writer Jeri Taylor and sportscaster Dick Enberg and made his first Trek appearance in the TNG sixth season episode "Time's Arrow, Part II". In the seventh season episode "Lower Decks", Enberg portrayed the Vulcan Ensign Taurik.

According to the call sheets of the seventh season episode "Renaissance Man", Enberg was originally not planned to reprise his role as Vorik as he was not featured on them. His Starfleet uniforms from his portrayal of Vorik were later sold off on the It's A Wrap! sale and auction on eBay. [1] [2] [3]

Early in his career, Enberg was featured in episodes of Quincy M.E. (1982 and 1983, starring Garry Walberg, John S. Ragin, and Robert Ito and with Renée Jones), Simon & Simon (1987, with Mary Carver, Ken Olandt, Richard Gilbert-Hill, and Conrad Hurtt), and Jake and the Fatman (1990, with Cassandra Byram). On the first two series, his mother worked as executive story editor and on the last one as executive producer.

Enberg was featured in the music drama Pump Up the Volume (1990, starring Christian Slater and with Robert Schenkkan, Gregg Daniel, Clayton Landey, John Kenton Shull, and Ed Trotta) and had guest roles in episodes of Father Dowling Mysteries (1991, with Eugene Roche and Roger Aaron Brown), Blossom (1992), Knots Landing (1992, with Peter Slutsker and directed by Reza Badiyi), Step by Step (1993, with David Graf), Lois & Clark: The New Adventures of Superman (1993, with Teri Hatcher, Tracy Scoggins, K Callan, and Gregg Daniel), and Dead at 21 (1994).

In 2013, Enberg suffered from a serious stroke but has since recovered. [4] [5] [6] He formed a musical act named Survivors' Cabaret with cancer survivor and fellow Star Trek alum Kendra Munger, which became the subject of a documentary. [7] [8] 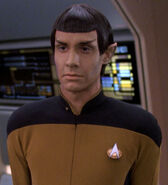 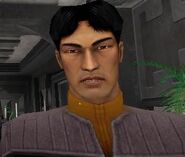 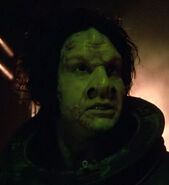