LT. Julian Bashir (Primary Character); see Other Appearances
Alexander Siddig (born 21 November 1965; age 56) is an actor best known for his portrayal of Doctor Julian Bashir on Star Trek: Deep Space Nine. He also appeared as Dr. Bashir in the Star Trek: The Next Generation sixth season episode "Birthright, Part I". He goes by the nickname of "Sid".

Alexander Siddig was born Siddig El Tahir El Fadil El Siddig Abderrahman Mohammed Ahmed Abdel Karim El Mahdi in Sudan, in Northern Africa, but spent most of his life in Britain where he attended the London Academy of Music and Dramatic Arts (LAMDA). His uncle on his mother's side is actor Malcolm McDowell; another uncle, on his father's side, was twice the prime minister of Sudan.

Siddig attended the London Academy of Music and Dramatic Arts (LAMDA) to study acting and theater; after leaving LAMDA he did a stage season in Manchester and worked as a director at a small London theater.

When he began acting, he adopted a shortened version of his name, Siddig El Fadil. He then changed his acting credit to Alexander Siddig at the start of the fourth season of Deep Space Nine. According to Siddig, "My name was a little confusing to people. And not just the audience. Casting directors are much more incapable of remembering one's name than the audience. And producers can be handicapped in that too. The other name said too much about what I wasn't. Siddig El Fadil is an important name. It is my name, officially, on my passport and all that, and one that I will keep. But for an actor it wasn't so suitable. So I started again, with half and half, which is more reflective of my character. As for Alexander, that was just a name out of a hat". (Star Trek: Deep Space Nine Companion (p. 257)) His directorial credit remained as El Fadil for one DS9 episode he directed: "Business as Usual".

A union between Siddig and his Deep Space Nine co-star Nana Visitor produced a son, Django El Tahir El Siddig. Visitor's pregnancy was incorporated into the show by having the unborn child of the married Keiko O'Brien (played by Rosalind Chao) transplanted to the womb of Visitor's character, the unmarried Kira Nerys. Django was born on 16 September 1996, during production on the DS9 episode "Let He Who Is Without Sin...". Siddig and Visitor were married on 14 June 1997. The two divorced in 2001, two years after Deep Space Nine wrapped production.

In 2005, Siddig was briefly romantically linked in the press with actress Kim Cattrall, herself a Star Trek alumna, having played Valeris in Star Trek VI: The Undiscovered Country. [2]

In 1979, Siddig had an uncredited non-speaking role as Tutankhamun in the BBC children's show Extraordinary, which was produced by a friend of his parents. [3]

Siddig first appeared to television audiences as Prince Feisal in the 1990 made-for-TV sequel to Lawrence of Arabia entitled A Dangerous Man: Lawrence After Arabia. When auditions came for Star Trek: Deep Space Nine in 1992, Siddig was originally considered for the role of Benjamin Sisko, but was reportedly deemed too young for the role. Michael Piller commented: "Rick [Berman] discovered Siddig on a PBS show, A Dangerous Man, a prequel to Lawrence of Arabia, in which he played King Farouk, and was very good. We'd been looking for Sisko from here to eternity and we told our people in Europe to find this fellow. We brought him in and we looked at him and he just jumped off the screen. There wasn't another doctor candidate. He was just delightful. We had not met Avery Brooks at that point and we asked ourselves, could Siddig possibly be Sisko? And we found out he was twenty-five years old, and that was too young". (Captains' Logs Supplemental - The Unauthorized Guide to the New Trek Voyages, p 21) [4](X)

In 2009, Siddig gave an interview in which he remarked that he is mainly recognized for his role on Deep Space Nine and that he once had to wait for three hours in an airport for the FBI to arrive, just so they could have his autograph (Timestamp 8:46). [5]

Siddig continues to perform for television on both sides of the Atlantic. In 2003 he guest starred in an episode of the popular BBC spy drama series Spooks (screened as MI5 in the United States) and in 2004 appeared in the TV movie The Hamburg Cell. In 2005, he appeared in a major role in an episode of the British detective series Agatha Christie's Poirot entitled "Cards on the Table". In 2006 he starred in the BBC television movie Hannibal, playing the title character (opposite Ben Cross). Also in 2006, he lent his voice to the "Patriot Games" episode of Family Guy, an animated series created by Trek fan Seth MacFarlane. He again voiced two characters in a 2009 episode of Family Guy.

In 2007, Siddig appeared as former terrorist Hamri Al-Assad in the sixth season of the hit FOX TV series 24. Other Trek actors to appear that season include Michael Reilly Burke, James Cromwell, Roger Cross, Gregory Itzin, Glenn Morshower, Natalia Nogulich, Raphael Sbarge, and Maury Sterling. He also played a villain in an episode of the BBC series Merlin in 2008 with, which was broadcast on NBC in 2009.

In September 2009, Siddig appeared in the BBC forensic crime drama Waking the Dead as Dr. Mohammed, a psychiatrist at a high security psychiatric hospital who is hiding a dark secret. In April 2010, it was announced that Siddig had joined the cast of the British science fiction series Primeval [6] for series 4 and 5, airing in 2011. On this show, he played Phillip Burton, a charismatic scientist and technology tycoon who is a private contractor put in charge of running the Government's "Anomaly Research Centre" but is secretly using the technology developed for his own purposes. In 2010, he also appeared in two episodes of Strike Back.

In 2012, he made guest appearances in the TV series True Love and Falcón.

From 2013 through 2015, Siddig played the recurring role of Al-Rahim throughout the run of the BBC/Starz fantasy-adventure drama Da Vinci's Demons. In 2013, he portrayed King Minos on the BBC series Atlantis, which aired in the U.K. and Canada and premiered on BBC America in November. He voiced Isaac Newton in an episode of Cosmos: A Spacetime Odyssey and was narrator in the TV movie Egyptian Vice. In 2015 he appeared in the mini-series Tut, starring Ben Kingsley.

In 2015 and 2016, he played Prince Doran Martell in the fifth and sixth seasons of Game of Thrones. [7] He was also interviewed for the GoT fifth season specials "New Characters/New Locations" and "Anatomy of an Episode: Mother's Mercy". In 2016, he also appeared in the TV movie Recon, several episodes of Peaky Blinders (with Tom Hardy and Annabelle Wallis) and in 2017 appeared in The Kennedys After Camelot as Aristotle Onassis (with Jonathan Whittaker).

In 2017 and 2018, he portrayed the recurring role of Ra's al Ghul in the FOX series Gotham, with episodes featuring John Doman and Dakin Matthews. In 2021, he appeared in the Star Wars animated show The Bad Batch, starring Dee Bradley Baker. He is currently filming the upcoming Netflix limited series The Spy, starring Sascha Baron Cohen. [8]

In 1987, Siddig had a small role in the movie Sammy and Rosie Get Laid. In 1998, he also voiced several roles in the Tiantic-tie in video game Titanic Explorer (alongside Olivia d'Abo, Michael Gough, and Michael Ensign).

Siddig has worked extensively in major motion pictures since production on Deep Space Nine came to an end in 1999. In 2000, he appeared as an ill-fated mountain climber in Vertical Limit. Two years later, he had a role in the fantasy action film Reign of Fire, alongside Trek guest star Alice Krige (though the two did not share any scenes together).

In 2006, Siddig appeared as the angel Gabriel in the Biblical drama The Nativity Story (with Shohreh Aghdashloo). He followed this with roles in the 2007 war epic The Last Legion, set during the last days of the Roman Empire, and the 2007 French drama, Un Homme Perdu (A Lost Man). He then played Prime Minister John Hatcher in the 2008 futuristic action thriller Doomsday, co-starring with his uncle, Malcolm McDowell, and appeared in the short movie The Boundary.

Siddig appeared in another French movie, Espion(s), and starred in a 2009 film entitled Cairo Time, which shot on location in Cairo, Egypt. In the film, Siddig played a retired Egyptian police officer sent to pick up his friend's wife, only to begin an affair with her. The following year, Siddig was seen in the blockbuster action/fantasy film Clash of the Titans, in which he appeared as Hermes/Mercury, and in 4.3.2.1, an independent film that was written, produced and co-directed by Star Trek Into Darkness actor Noel Clarke. Siddig also co-starred in director Julian Schnabel's 2010 drama Miral, acting out the father of the title character, a young woman who witnessed Hind Husseini's efforts to establish an orphanage in 1948 Jerusalem.

In 2012 and 2013, Siddig was the star on the Canadian thriller Inescapable (with Saad Siddiqui) and appeared in the comic drama May in the Summer. He could then be seen in The Fifth Estate, a dramatic thriller about WikiLeaks founder Julian Assange, played in the film by Star Trek Into Darkness actor Benedict Cumberbatch.

In 2016, he played characters in City of Tiny Lights and the short movie Baby Mine and in 2017 co-starred in Submergence.

On stage, Siddig appeared with Kim Cattrall in a production of the play Whose Life Is It Anyway in 2005. It was as a result of this pairing that Siddig and Cattrall, both alumni of the LAMDA, began dating soon afterwards. In 2014, he played Saladin in the London-based play Holy Warriors.

Between 2008 and 2012, Siddig lent his voice to four Doctor Who audio dramas, making him one of few people to be involved in both Star Trek and Doctor Who productions. In one of those dramas the Doctor was voiced by Colin Baker (the Sixth Doctor), who had a character named after him in an okudagram and later appeared in Star Trek Continues. In 2015, he voiced the character Wolf in the radio drama Tumanbay. 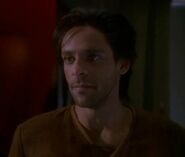 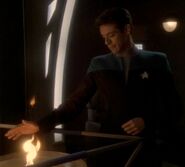 Changeling (in the form of Bashir)
(DS9: "The Adversary") 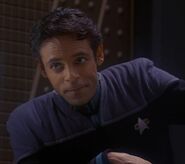 Changeling (in the form of Bashir)
(DS9: "Rapture", "The Darkness and the Light", "The Begotten", "In Purgatory's Shadow", "By Inferno's Light") 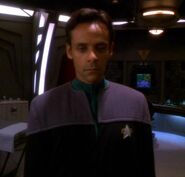