Besides Patrick Stewart, she is the only actor to appear in every episode of both seasons.

Pill worked in productions in her native Canada and it took her a number of years before she broke into the American market. One such appearance included an episode of the Canadian series Traders, which starred Bruce Gray. Pill was able to secure a spot on CSI: Crime Scene Investigation starring Wallace Langham and Liz Vassey in "Would, Could, Shoulda" co-written by Naren Shankar and featuring Michael Ensign and Michael G. Hagerty.

Directly after her work on Picard, Pill appeared in a major supporting role in the acclaimed 2020 science fiction mini-series Devs (served by digital VFX company Double Negative) produced by FX Productions for Hulu, and like she had in Picard, appearing in every episode of that series while playing a very similar part as the scientist "Katie". The similarities with Picard did not end there as the major theme of the series was furthermore revealed to revolve around the preservation of a consciousness in an artificial construct, comparable to the one Data had been preserved in, as divulged earlier that year in the Picard season one finale "Et in Arcadia Ego, Part 2".

Pill made a presence as activist Anne Kronenberg in the 2008 biopic Milk costarring Cully Fredricksen and Kelvin Yu. Pill gained wider recognition with her turn in Scott Pilgrim vs. the World with Bill Hader. For 2014, Pill joined the cast of Cooties which also counted Rainn Wilson as a costar. In 2016, Pill got to benefit from the exposure of being in the Coen Brothers' film about filmmaking, Hail, Caesar! alongside Clancy Brown, Dennis Cockrum, Patrick Fischler, Robert Picardo, and Clement von Franckenstein. 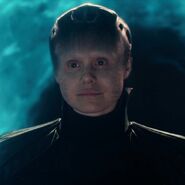