Daled IV
An allasomorph was a vaguely humanoid anthropomorphic shape-shifting species, once thought to be only rumor, capable of altering its molecular structure into that of other species. The species was mentioned in the galactic zoological catalog. Their homeworld was Daled IV and its moons. (TNG: "The Dauphin")

Unlike the Changelings of the Gamma Quadrant, allasomorphs were capable of enjoying the flavors present in foods, required sleep, and could become infected with sicknesses common to other humanoids.

In the mid-2360s, there was no formal contact between Daled IV and the United Federation of Planets. As such, little information was known to them during this time. However, the planet was tidally locked, resulting in very different cultures between the two hemispheres. The two sides were frequently in conflict throughout their recorded history.

In 2349, a man from one side and a woman from the other had a child, Salia, hoping that her not being from either side would one day allow her to neutrally govern and unify the planet. They contacted the Federation, and asked for a Federation starship to transport her to Klavdia III, where she was to train for sixteen years before her return. The parents died shortly thereafter, killed during the conflict.

In 2365, Starfleet sent the USS Enterprise-D to Klavdia III to pick up Salia, and transport her (and her caretaker Anya) back to Daled IV. Although Salia was slightly reluctant to govern her people, having been isolated for so long, she did decide to beam down and take her place in the government. Salia wished that her world would one day have formal contact with the Federation. (TNG: "The Dauphin")

In 2380, Ensign Beckett Mariner briefly theorized that Lieutenant Barbara Brinson was actually a dauphin, although she quickly ruled that out. (LD: "Cupid's Errant Arrow") 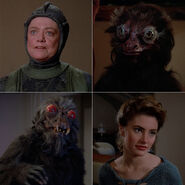 One of the forms twice taken by Anya

According to an internal reference document, listing all the aliens seen in Star Trek: The Next Generation, which was circulated around the time of the production of TNG Season 5, this species was identified as "Daledians". They were further given the description of "A race of shape shifters with the power of cellular metamorphosis to take any form desired."

After "The Dauphin" aired, the race was canonically known only as the allasomorphs. The episode title referred to Salia's status as the heir to the throne ("dauphin" is a human title referring to an heir), not to her species. However, years later, Ensign Beckett Mariner pointed at a picture of an allasomorph and called it "a dauphin," revealing this alternative name for the species. (LD: "Cupid's Errant Arrow")