Suffering through his first infliction of pon farr, the Vulcan biological mating urge, Spock must return to Vulcan to marry his betrothed or he will die. However, when the Enterprise arrives at Vulcan, complications at the ceremony may endanger Captain Kirk as well.

Dr. McCoy notices that Spock is growing restless and has stopped eating. He also is becoming extremely irritable, throwing Nurse Christine Chapel out of his quarters and physically flinging the Vulcan plomeek soup she has specially prepared for him. After this outburst, he demands a leave of absence on his home planet Vulcan.

Captain Kirk is baffled by Spock's behavior, but orders the Enterprise to Vulcan. However, a priority message forces him to change course back to Altair VI in order to be on time for the new President's coronation. As soon as he leaves the bridge, Spock orders the course changed back to Vulcan.

Kirk orders Spock to sickbay, where McCoy examines him and finds that if he is not brought to Vulcan within eight days, Spock will die due to extreme stress produced by chemicals being pumped through his body.

When Kirk confronts him, Spock says he cannot tell the cause of his problem because it is a deeply personal affair. Kirk eventually cajoles Spock into revealing that his problem is "Vulcan biology," which Kirk correctly concludes means Vulcan reproduction.

Spock explains to them that Vulcans are married as children with the understanding that they will fulfill this commitment when they become adults. Spock has reached this time, the pon farr, and if he doesn't get to Vulcan immediately to mate with his bride, T'Pring, he will die. Kirk jeopardizes his career by disobeying a direct order to the contrary from Starfleet, and proceeds with all possible speed to Vulcan. As Spock's friends, Kirk and McCoy are invited to witness the marriage ritual – the koon-ut-kal-if-fee. The master of ceremonies is T'Pau, the only person ever to turn down a seat in the Federation Council.

Trouble starts when T'Pring announces she would rather not marry Spock. T'Pring invokes the kal-if-fee -- her right to have Spock fight for her. However, she chooses Kirk as her champion, over the strenuous objections of Stonn, another member of the wedding party, who won't shut up about his traditional rights until T'Pau commands "Kroykah!" (meaning "Stop!") Both Kirk and McCoy (correctly) speculate that Stonn is T'Pring's actual choice and would be picked next should Kirk decline. Fearing Spock is now too weak to fight Stonn, Kirk agrees. It is only then he is informed that it is to be a fight to the death.

The fight ensues and Spock quickly demonstrates physical superiority. McCoy objects to T'Pau that Kirk isn't used to the Vulcan atmosphere and climate. He asks permission to inject the captain with a tri-ox compound to compensate. T'Pau agrees and Kirk is given the injection.

During the fight, Spock apparently strangles Kirk to death, and McCoy accompanies the captain's body back to the Enterprise. Spock, his mating urges curbed by the knowledge that Kirk, his friend and captain, is dead by his own hand, demands to know why T'Pring took Kirk as her champion. T'Pring reveals that she did not want to be the "consort of a legend", as Spock had become to his people, and instead started an affair with Stonn; she chose Kirk as her champion to force a stalemate - Kirk, being an outsider and not knowing her, would have no reason to keep her as his bride, and Spock would either release her out of the stigma of claiming a wife who had challenged the marriage, or be too wrapped up with his career in Starfleet to be around to ensure their marriage stuck, thus allowing her to be with Stonn regardless of the outcome. Seeing the flawless logic behind the reasoning, Spock relinquishes T'Pring to Stonn, then returns to the starship, expecting to face court-martial for murder.

In sickbay, however, he finds Kirk alive and well, having been injected not with tri-ox, but with a neuroparalyzer which simulates death - which McCoy had repeatedly attempted to tell him, but each time Spock had cut him off to continue spelling out his guilt and the consequences, discovering the truth only when he had mentioned that Scotty must take command, at which point Kirk playfully demanded to know why he hadn't been consulted regarding this decision. Here, he is overjoyed to find Kirk alive, betraying his emotion with a big smile though he quickly ended the display when he realized that McCoy of all people had seen it. Kirk is let off the hook for disobeying orders when Starfleet retroactively grants permission to divert to Vulcan at T'Pau's request.

"Captain's log, stardate 3372.7. On course, on schedule, bound for Altair VI via Vulcan. First Officer Spock seems to be under stress. He has requested and been granted shore leave. Ship surgeon McCoy has him under medical surveillance."

- McCoy, responding to Spock's invitation to the ceremony (with the hidden meaning that despite their habit of contention, he considers the Doctor his friend)

"I think I'm going to get space sick."

- Chekov, on the changing flight plans between Vulcan and Altair VI

"It is said thy Vulcan blood is thin. Are thee Vulcan or are thee human?"

- Spock, upon finding out Kirk is still alive 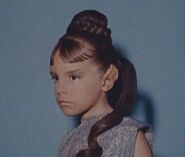 ...and its CGI replacement

...and its CGI replacement
Add an image to this gallery

Retrieved from "https://memory-alpha.fandom.com/wiki/Amok_Time_(episode)?oldid=1221733"
Community content is available under CC-BY-NC unless otherwise noted.