A Planet of Ice. A People of Fire. A Passion for Space.

From the book jacket
The Andorians have always been something of a paradox; a mystery at the heart of the Federation. Now learn the codes of Andorian honor, ancient ways of behavior enforced at knife point and exalted in song. Walk the glacier paths and fly above the towering moraines of ice-blue Andoria. Pilot the sleek, powerful ships of the Andorian Free Trade fleet, or serve proudly on the all-Andorian starship, the U.S.S. Eagle. (You'll learn how to say "Eagle" in Andorian, as well.) Among the Clans contains detailed information on the history, planetology, and geography of Andoria and a guide to their colony worlds across the Andor sector.

With Among the Clans, your Andorian characters will come alive – and their enemies will hate you for it!

In the 17th century, after nearly a millennia of civil war the Andorian people decided on one icy night to destroy all historical records after a new peaceful faction came to power. This let their people get over the differences that once nearly annihilated their species, and as of the 24th century it was something of a planetary pastime to be a historian, trying to discover Andoria's lost ages (now that their race has matured, and would be able to understand them without risking war).

Among the Clans is a sourcebook for the Last Unicorn Games Star Trek RPG.

It defines three sub-races of Andorians: the predominant Thalassan, with high, knobby antennae (as seen in the original Trek); the Talish (of Star Trek: The Motion Picture), who have forward, tendril-like antennae; and the Bish'ee (of TNG), who have diminishing antennae standing straight out from their head.

The fighting ritual ushaan (literally "private" or "intimate" fight) which is usually fought with a chaka blade was first described within this book. It was established as ritual fight with precise laws by Lor'Vela, the Andorian reformist, in the 17th century (of Earth). It was designed to end the brutal clan wars, but had roots from the time before Lor'Vela's reformation.

This was picked up by author Manny Coto for ENT: "United" where Archer and Shran fight against each other. Along with the published information seen in FASA's Star Trek: The Role Playing Game this book also helped put forth the idea of an ice covered Andoria. 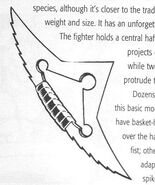 Retrieved from "https://memory-alpha.fandom.com/wiki/Among_the_Clans?oldid=2429210"
Community content is available under CC-BY-NC unless otherwise noted.