Andray Johnson (born 10 March 1961; age 59) is an actor who worked as recurring background actor on Star Trek: The Next Generation, Star Trek: Voyager, and the Star Trek films Star Trek Nemesis and Star Trek Into Darkness. He received no credit for his appearances. His uniform from Nemesis was later sold off on the It's A Wrap! sale and auction on eBay. [1]

For the episode "The Masterpiece Society", Johnson filmed his scenes between Wednesday 13 November 1991 and Friday 15 November 1991 on Paramount Stage 16.

Hailing from Chicago, Illinois, Johnson joined the U.S. Marines and later moved to San Diego, California. He pursued an acting career and was featured in the romance Twogether (1992, with Brenda Bakke, Jim Beaver, Thomas Knickerbocker, and Ellen Albertini Dow), the comedy Loaded Weapon 1 (1993, with William Shatner, James Doohan, F. Murray Abraham, J.P. Hubbell, Charles Napier, Whoopi Goldberg, and Lena Banks), as stand-in for Wesley Snipes on the science fiction film Demolition Man (1993), the reality series Behind Bars (1994), the short project Hoggs' Heaven (1994), the short crime comedy Murder Was the Case: The Movie (1995, with Bob Minor and Fred Williamson), and in episodes of Hangin' with Mr. Cooper (1995), U.S. Customs Classified (1996), Could It Be a Miracle? (1996), and Moesha (1997, with Estelle Harris). 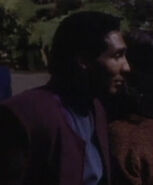 Retrieved from "https://memory-alpha.fandom.com/wiki/Andray_Johnson?oldid=2532672"
Community content is available under CC-BY-NC unless otherwise noted.