Enterprise-E officer; E. Hamboyan; E. Hamboyan (mirror)
Andrew MacBeth is the actor who portrayed MACO Private E. Hamboyan and his mirror universe counterpart E. Hamboyan (mirror) in several episodes of Star Trek: Enterprise as well as a Starfleet officer in Star Trek Nemesis. As a background actor he received no credit for his appearances. His costume as E. Hamboyan was sold off on the It's A Wrap! sale and auction on eBay. [1] MacBeth also worked as stand-in on Enterprise such as for Steve Blalock on the final episode "These Are the Voyages...".

Among his acting resume are the science fiction thriller Time Runner (1993), the thriller The Proposal (2001), and Roland Emmerich's science fiction film The Day After Tomorrow (2004, with Aaron Lustig). He also appeared in the Playboy production Playboy Video Centerfold: Playmate of the Year Dalene Kurtis (2002) and in the television series Hollywood Off-Ramp (2000), CSI: New York (2005, with Lori Petty), The Search for the Next Elvira (2007, with Kane Hodder and Cindy Sorensen), Millennium, and General Hospital. 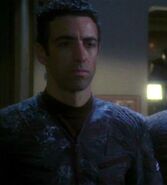 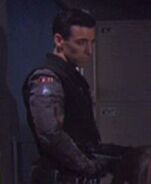 Retrieved from "https://memory-alpha.fandom.com/wiki/Andrew_MacBeth?oldid=2721776"
Community content is available under CC-BY-NC unless otherwise noted.