Angus McClellan is an actor who appeared as a Starfleet officer in several episodes of Star Trek: Deep Space Nine during its final three seasons. He also appeared in two fourth season episodes of Star Trek: Voyager for which he filmed his scenes on Thursday 4 September 1997 and Friday 5 September 1997 on Paramount Stage 16 and Wednesday 8 October 1997 on Paramount Stage 9. He received no credit for his appearances and was identified by fellow background actor Randy James.

McClellan and James both worked on the science ficition series Roswell on which McClellan was the stand-in for lead actors Brendan Fehr and Adam Rodriguez as well as a recurring background actor. McClellan also appeared in the science fiction thriller Invader (1996, with Carlos Carrasco, Leland Orser, David Cowgill, Andrew Alden, and Michael Bailous) and worked as stand-in on the short thriller Another Life (2002, directed and produced by Tracey D'Arcy, written by Ronald D. Moore, starring William Sadler, and with fellow stand-in Joey Spagnola). 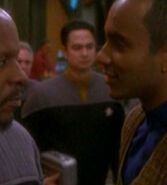 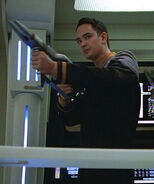 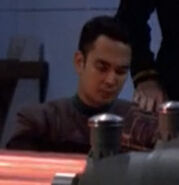 Retrieved from "https://memory-alpha.fandom.com/wiki/Angus_McClellan?oldid=2415257"
Community content is available under CC-BY-NC unless otherwise noted.