Anne Woodberry is the actress who played a Nottingham Castle courtier in the Star Trek: The Next Generation fourth season episode "Qpid". She filmed her scenes on Thursday 14 February 1991 on Paramount Stage 16.

Beside her work on Star Trek, Woodberry also worked as background performer on the 1995 television action film Personal Vendetta, with Mark Wilson. 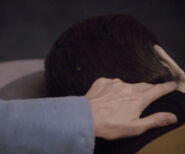 Hand double for Gates McFadden
TNG: "The Game"
(uncredited)
Add an image to this gallery

Retrieved from "https://memory-alpha.fandom.com/wiki/Anne_Woodberry?oldid=2415155"
Community content is available under CC-BY-NC unless otherwise noted.