Annette was a young female civilian aboard the USS Enterprise-D in 2366.

She was a friend of Wesley Crusher and part of a group of young people observed by Beverly Crusher in Ten Forward, shortly after her return to the Enterprise-D. Annette seemed somewhat attracted to Wesley, driving Beverly to ask Guinan for information about the girl. (TNG: "Evolution")

Annette was played by actress Amy O'Neill, who received no credit for this appearance.

Their name originated from a scripted source. Her character originally had several lines of dialogue with Wesley and another Enterprise-D youth, Eric, but the scene was cut for time. Annette and Eric wanted Wesley to join them on a holodeck ski trip, but he was too busy with work to join them. Later, Annette was injured when the nanites caused the holodeck to malfunction.

Video of these cut scenes can be viewed at Trekcore.com. 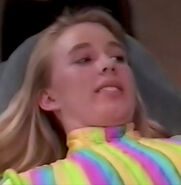 Annette in a deleted scene

Eric, his girlfriend, and Annette run into Wesley