Anovos Productions LLC is an American company based in Simi Valley, California which produces replicas of costumes, helmets, props, patches, jewelry, and other novelty items based on licensed entertainment properties.

The company has released a large number of Star Trek-related costumes and other apparel items, along with jewelry and novelty products.

Anovos has produced items for Nerd Block and retails a number of Star Trek-related items manufactured by Eaglemoss Collections, QMx and Roddenberry.com through its webshop.

In 2018, "interactive" electronic Star Trek: Discovery phaser pistol and rifle prop replicas were released, alongside a number of Starfleet uniform costumes from the series.

A number of dedication plaques and six to twelve-inch long starship miniatures from Eaglemoss Collections' Star Trek: The Official Starships Collection and its Discovery spin-off were released by Anovos, beginning in 2018. The ships are marketed by Anovos as Star Trek Collectible Scale Starship Models and are co-branded with Eaglemoss' Hero Collector imprint. [4] 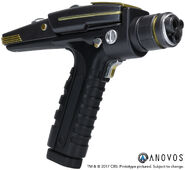 Roddenberry.com Kataan probe pendant
Add an image to this gallery

Retrieved from "https://memory-alpha.fandom.com/wiki/Anovos?oldid=2523360"
Community content is available under CC-BY-NC unless otherwise noted.