Memory Alpha
Register
Don't have an account?
Sign In
Advertisement
in: DIS performers, Performers, The Ready Room guests,
and 2 more

Christopher Pike (primary character; see additional characters for more)
"I am humbled and deeply touched by this amount of love. I have NEVER received such gratitude. Please know that my own gratitude at having been given the opportunity to walk in Captain Pike’s boots is equaled only by that which I feel for the Trek family’s devotion. Seriously, thank you from the bottom of my heart."
– Anson Mount, on his reception by the fanbase as Christopher Pike (14 April 2019, Facebook)

In 1999, he appeared in one episode each of Ally McBeal and Sex and the City (starring Kim Cattrall). In 2000, he had a role in the movie Boiler Room, starred as the title character in Tully and appeared in Urban Legends: Final Cut, which starred Jennifer Morrison. In 2002, he co-starred in the teenage coming-of-age film Crossroads, which also featured Kim Cattrall and Zoë Saldana in the cast. His other film credits include City by the Sea (2002), In Her Shoes (2005, with Norman Lloyd), All the Boys Love Mandy Lane (2006, with Michael Welch), Burning Palms (2010, with Zoë Saldana and Anson Williams), Straw Dogs (2011), and Supermacy (2014).

He also guested in episodes of television series like Smallville (with John Glover), CSI: Miami, J.J. Abrams' Lost (with Daniel Dae Kim and Terry O'Quinn), Law & Order, and Dollhouse. In 2000-01, he played a recurring role in Third Watch and in 2004-05, he co-starred in the short-lived series The Mountain.

Between 2011 and 2016, Mount starred in Hell on Wheels as Cullen Bohannon, opposite Star Trek: Deep Space Nine actor Colm Meaney and Discovery guest stars Christopher Heyerdahl, Jake Weber, and Chelah Horsdal. For the last few years of the series, he also served as one of its producers. In 2014, he starred in the video game, The Evil Within (with Daniel Riordan), and in 2015, he starred in horror film Visions (with John de Lancie and Gillian Jacobs). In 2017, he starred in the short-lived superhero series Inhumans (with Tom Wright).

Between his appearances in Star Trek: Discovery and Star Trek: Strange New Worlds, Mount appeared in the 2021 film The Virtuoso, which also featured Diora Baird, and voiced Batman / Bruce Wayne in the animated film Injustice, released the same year, featuring the voices of Gillian Jacobs, Faran Tahir, and Fred Tatasciore. 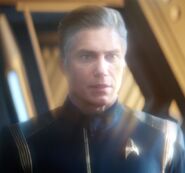 Christopher Pike (illusion)
(DIS: "Through the Valley of Shadows")