The Antares class cruiser was a type of starship operated by civilians, sometimes independently, in and around the United Federation of Planets, and by the Petarians.

According to the script notes from "Family Business", Kasidy's ship was an "independent interstellar freighter." [1]

The Antares class was a warp-capable freighter that was in operation from Earth as early as the 22nd century, and continued to be in service through the mid-24th century, with some being constructed at the Luna Shipyards.

In an alternate 2165 this type of vessel was included in the Earth convoy destined to settle on Ceti Alpha V. (ENT: "Twilight")

These vessels could operate with a crew ranging from two to twelve. (TNG: "Legacy"; DS9: "The Passenger")

Ships of the class were protected by standard deflector shields. (DS9: "The Passenger")

They also carried at least one escape pod. (TNG-R: "Legacy")

The Antares class was capable of hauling a variety of freight, including deuridium, inertium ore, unstable biomatter, duridium ore, and dilithium. (DS9: "The Passenger", "Family Business", "The Adversary"; VOY: "Author, Author") In addition, crews could also haul various types of supplies (like medical supplies) and material stipulated by contract. (DS9: "For the Cause")

The script of "The Way of the Warrior" described the Xhosa as "a bulky, alien-looking freighter." The script of "For the Cause" described the Xhosa as "the twenty-fourth century equivalent of a tramp steamer." (Star Trek: Deep Space Nine Companion - A Series Guide and Script Library)
According to the script for "Author, Author", this type of vessel was identified as a "small ore carrier". 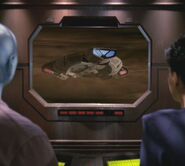 Viewscreen of the Xhosa

Bridge of the Xhosa
Add an image to this gallery
According to the final draft script of "For the Cause", "The Bridge is laid out in a rectangular design than the circular pattern preferred by Starfleet. The rectangle runs fore and aft, with the forward end dominated by a viewscreen and the aft by a doorway. The helm control is in the center of the room and the other consoles line the two opposing walls and are usually unmanned. This is definitely a "working" ship with no frills. This is also an older vessel and should not have the clean, freshly scrubbed feeling of a Starfleet bridge." ([2]
The Norkova bridge set was later on redressed as the Nebula-class USS Prometheus bridge from the second season episode "Second Sight". Whereas the completely different Xhosa bridge was one of the few to not feature a captain's chair on the bridge; instead, there was a central console in front of the viewscreen manned by the captain and the engineer of the ship.
In "For the Cause," the Xhosa's bridge set was built on Paramount Stage 18, and was built in part from the bridge of the USS Saratoga. In designing the bridge, the Art Department took a cue from a reference in "Family Business", as according to Scenic Art Assistant James Van Over, "There had been references about how the Xhosa was an old ship, so we mimicked the old blinking lights from the original series on the ship's control panels. [Scenic Artist] Doug Drexler and Mike Okuda made me watch episodes of Star Trek over and over again to make sure the timing was right on how they blink." (Star Trek: Deep Space Nine Companion (p. 341)) Alternatively, display graphics were patterned after the screens seen on the bridge of the USS Enterprise in the original series. (Star Trek Encyclopedia (2nd ed., p. 568))

The Antares -class designation as established for the SS Xhosa, was, according to Mike Okuda, meant as a homage to the Antares (NCC-501), referenced to in the Star Trek: The Original Series first season episode "Charlie X", further elaborated upon in all the interior details, the TOS style consoles and the SS Xhosa dedication plaque. [3]

The studio model of the Xhosa was a repainted reuse of the Norkova from "The Passenger". The Talarian freighter was first identified in the Star Trek Encyclopedia (? ed., p. ?) as an Antares-class ship, the Xhosa was identified as such on her dedication plaque, suggesting both designs might be variants of the same class. For further information on the studio model, see Batris model.

Retrieved from "https://memory-alpha.fandom.com/wiki/Antares_class_(Federation)?oldid=2705432"
Community content is available under CC-BY-NC unless otherwise noted.