Memory Alpha
Register
Don't have an account?
Sign In
Advertisement
in: DIS performers, Performers, After Trek guests,
and 2 more
English

He is best known as the original Mark Cohen in the musical Rent, and reprised the role in the 2005 film version directed by Chris Columbus, costarring Sarah Silverman and Joel Swetow. (Wilson Cruz also appeared in the musical Rent, performing in the "Benny Tour," but never performed together with Rapp.)

Rapp made his acting debut as horny teenager Darryl Coopersmith in the 1987 comedy Adventures in Babysitting, which coincidentally was Columbus's directorial debut opposite Ron Canada and John Chandler. Rapp followed up with 1989's Far from Home, costarring Matt Frewer and Dick Miller. That year Rapp also appeared in the thriller Grave Secrets, with Trek veteran David Warner. In 1993, Rapp was cast as bigoted college student Richard "McGoo" Collins in the 1950s set drama School Ties, along with Ed Lauter and Kevin Tighe. That year period dramas were a theme as Rapp next appeared in the '70s-era coming-of-age film Dazed & Confused, with Christine Harnos. The only contemporary film in which Rapp appeared that year was Six Degrees of Separation, with J.J. Abrams, Bruce Davison, and Oz Perkins. Hit films continued to follow with Rapp making a presence in the natural disaster thriller Twister in 1996, joined by Zach Grenier, Richard Lineback, Alan Ruck, and Scott Thomson. Rapp's most recent film work is 2016's Do You Take This Man, with Sam Anderson and Thomas Dekker.

Rapp's debut on the small screen was in the 1990 telefilm Sky High, co-directed by James Whitmore, Jr. In 1994, Rapp was seen in Assault at West Point: The Court-Martial of Johnson Whittaker, with John Glover and Brad Greenquist. Rapp ended the '90s costarring in 1999's Man of the Century, with Frank Gorshin. Following their work in Twister, Rapp and Ruck worked together again in 1997 on Ruck's series Spin City in the first season episode "An Affair to Remember", with John Harrington Bland. In 2000, Rapp was seen in the TV biopic The Beach Boys: An American Family, alongside Jad Mager, David Spielberg, Ned Vaughn, and Clay Wilcox.

Rapp is openly gay and has been out most of his career. His character is also the first openly gay character in the TV series. [3]

In 2001, in an interview with The Advocate magazine, Rapp revealed that in 1986, when he was 14, he was the subject of unwanted sexual advances by a then-unnamed actor. [4] In 2017, galvanized by other actors revealing their experience of sexual harassment in Hollywood, Rapp stated that the actor in question was Kevin Spacey. [5] 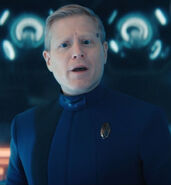