Following his featured roles in the second and third season of Voyager, he portrayed a Vulcan adviser in the first and second season of Enterprise. He was identified by the call sheet for "Broken Bow" and the name tag of his costume which was sold off on the It's A Wrap! sale and auction on eBay and was also worn by regular background actor Louis Ortiz. [1]

One of Acker's most recent roles was that of one of a reporter in the drama Frost/Nixon (2008, with Andy Milder, Geoffrey Blake, Clint Howard, Ned Vaughn, and Googy Gress). Acker is maybe best known for his recurring role as Norman the doorman in the comedy series The Suite Life of Zack and Cody (2006-2007, along regular Kim Rhodes). [2] [3] 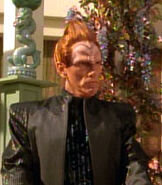 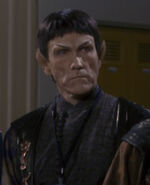 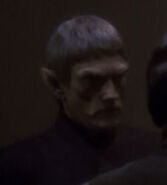 Retrieved from "https://memory-alpha.fandom.com/wiki/Antony_Acker?oldid=2526045"
Community content is available under CC-BY-NC unless otherwise noted.