Appointment with Danger was a crime movie, produced on Earth in 1951. It starred actor Alan Ladd as the lead character, Al Goddard, and featured Murray Alper as a taxi driver and Sid Tomack as a trainman.

In 2153, in a nightmare experienced by T'Pol following events aboard the D'kyr-type starship Seleya and the destruction of that vessel, this film was part of movie night in the mess hall aboard Enterprise NX-01. (ENT: "Impulse")

The film also featured TOS guest star William Meader.
This precise film wasn't selected when the final draft script of "Impulse" was issued. As a result, that script referred to the film as "a TBD noir-style movie" and the teleplay further noted, "
This will be nondescript, black & white footage from the 1940's." The footage to be used in the episode was also referred to as "a TBD scene". On the other hand, dialogue spoken by three ENT main characters while the film was being shown in Enterprise's mess hall, ostensibly regarding the movie, was written at that point. Consequently, the lines they have about the film don't actually apply to Appointment with Danger at all.

Alper as the taxi driver 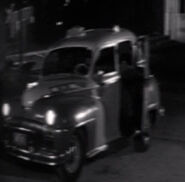 A taxi
Add an image to this gallery

Retrieved from "https://memory-alpha.fandom.com/wiki/Appointment_with_Danger?oldid=2539456"
Community content is available under CC-BY-NC unless otherwise noted.