Arctic One was the designation for an United Earth Arctic One-type transport that was in service in the mid-22nd century. In 2153, this starship was assigned to the A-6 excavation team, an Arctic Archaeology Team, a branch of the Earth Sciences Institute, for an exploration of Earth's Arctic Circle.

During their exploration of the Arctic Circle, the A-6 team discovered a craft of unknown origin. As they investigated the crashed vehicle and its crew, later identified as Borg drones, the nine members of the team were assimilated, along with their ship, into the Borg Collective. The new drones then attempted a journey in Arctic One to the Collective's territory in the distant Delta Quadrant. While not normally armed with weapons, the Borg-assimilated Arctic One had developed cutting beams and proton weapons. Its top speed has also been increased to warp 3.9.

En route, the ship attacked a Tarkalean freighter, which sent out a distress call asking for assistance. The United Earth starship Enterprise NX-01, captained by Jonathan Archer, arrived to help the Tarkaleans. Archer ordered the assimilated transport to stop its attack or be fired upon, to which the transport fired proton bursts at the starship. Enterprise returned fire with phase cannons, disabling the transport's weapons. Arctic One then retreated at warp while Enterprise sent an away team to help the survivors.

Arctic One was later intercepted by Enterprise, having been upgraded even further: its maximum speed was now warp 4.8, its mass had increased by three percent, and its defenses had been improved as well. The transport dropped out of warp before sending an activation sequence which disabled Enterprise's weapons and warp drive. The transport closed in and attacked Enterprise, critically damaging her hull before sending six drones onto the starship. Captain Archer and Lieutenant Malcolm Reed, the armory officer, then beam aboard the transport and eventually destroyed the EPS manifold disabling the transport's systems.

When Archer determined there was no way to help the assimilated crew members, he decided to destroy the transport. Arctic One tried to lock weapons again but was destroyed by Enterprise, using four spatial torpedoes and a phase cannon blast; however, before the ship's destruction, the drones successfully transmitted a subspace message to the Delta Quadrant, alerting them to Earth's location. (ENT: "Regeneration")

Schematic of assimilated Arctic One

Another schematic of assimilated Arctic One 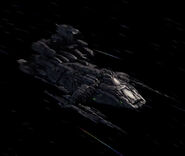 Destroyed by Enterprise
Add an image to this gallery

Arctic One as it appeared in the beginning and Borgified was illustrated by John Eaves. Eaves recalled "My job on this one was to create an Arctic exploration vessel that makes the discovery and later becomes Borgified. The first sketch is high profile vessel that I thought when Borged could form a cube. This idea was passed on and the second sketch got the approval. The ship is lightly based on a stylized snow mobile. Once Borged, it goes thru a variety of changes and this second sketch try’s to convey on of the stages of coverage. Pierre over at Eden modeled this one(...)" [1] Views of the model and design sketches of the ship can be found here and here.

In the writer's commentary for "Regeneration" on the ENT Season 2 DVD, the episode's writers revealed that the reason the ship's mass kept growing was an early concept for the episode where the ship would have eventually evolved into a Borg sphere, implying that the Borg don't have traditional shipyards, but instead take ships they attack and transform them into the commonly-seen Borg vessels. This concept was rejected in the final script, however. (Star Trek: The Official Starships Collection, issue 99, p. 16)

The Arctic One is featured as January cover of the 2008 Star Trek: Ships of the Line calendar, titled "Things From Another World" by John Teska.

Retrieved from "https://memory-alpha.fandom.com/wiki/Arctic_One?oldid=2663132"
Community content is available under CC-BY-NC unless otherwise noted.