"Ardra" was the alias of a female humanoid who lived during the mid-24th century, who made a living as a con artist, impersonating people in order to gain wealth and favors.

Prior to 2367, she gained access to a starship and crew which had advanced cloaking, transporter technology and energy beams which could create planetary tremors. She also had an implant put in her which allowed her to control her technology with eye movements. She successfully maintained 23 aliases in the same sector as Ventax II, as well as more in other sectors. She knew of other evil spirits as well.

In 2367, she learned of the Ventaxian myth of Ardra and the lore surrounding her return. She studied the myth and history, including the Contract of Ardra, and revealed herself to the Ventaxians, fooling them into believing that she was their deity. Acost Jared, the Ventaxian leader, immediately surrendered to her. She demanded a census and a measure of their productivity. Her knowledge was sufficient to deceive the Ventaxians and evade any accusations.

At the same time, Captain Jean-Luc Picard on the USS Enterprise-D arrived on the planet to respond to a Federation station distress call. Seeing her, he decided to help Acost Jared to disprove her assertions. Seeing Picard's defiant and disbelieving nature, the impostor immediately took interest in him, and attempted to seduce him, unsuccessfully.

The impostor also claimed she owned the Enterprise and her crew, due to the terms of the Contract, and had her ship's cloak extended over the Enterprise so Picard could not return to it. When Picard requested an arbitration of this situation, she agreed on condition that, if Picard lost, he would give himself to her willingly. She then participated in questioning Jared and Picard with Data acting as an arbitrator. "Ardra" continued to use her "powers" to prove to the court that she was indeed "real", while Picard focused on disproving her existence and role in events. He pointed out that all of the changes on Ventax were gradual, natural changes, with no indication that Ardra had so much as picked up a single piece of rubbish while Ventax was rebuilding its civilization. The impostor, in turn, simply had to establish that Jared believed she was Ardra and that her appearance long ago effected the change. Data confirmed that Ventaxian law validated her argument.

Unbeknownst to her, Geordi La Forge and Doctor Howard Clark, the station's director, were pinpointing her ship in orbit. Commander William T. Riker led an away team to arrest the ship and crew, and used the technology to prove to Jared that "Ardra" wasn't who she appeared. As a result of Picard's testimony, the impostor was taken under arrest by the Ventaxians. (TNG: "Devil's Due") 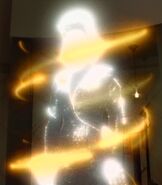 Ardra's "magic" – which turned out to be part of an impostor's con-game. 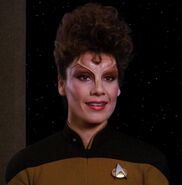 Ardra in a Starfleet uniform 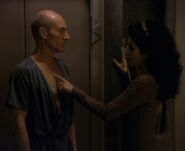 Ardra appearing as the Devil

The impostor Ardra was played by Marta Dubois.

During the first six different script versions, Ardra was originally a man. (The Official Star Trek: The Next Generation Magazine issue 19, p. 10)

In the spin-off novel Star Trek: Prey: The Hall of Heroes, as the crew of the Enterprise-E try to deal with the threat of a group of Klingon criminals descended from Kruge, they recognize some of the tricks used by their enemies as the same tricks used by Ardra and her affiliates. With this revelation, Picard contacts the still-imprisoned Ardra for insight into their actions, prompting Ardra to assist the Enterprise in neutralizing the current con artists, feeling that their actions cheapened what her organization was meant to stand for. Once Kruge and his allies are defeated, Ardra and the rest of her crew are released on a probationary period to deal with similar threats in the Federation, Ardra musing that she will enjoy the challenge.