James Doohan
Lieutenant Arex was a male Edosian Starfleet officer who lived during the mid-23rd century. He served in the command division aboard the USS Enterprise under Captain James T. Kirk, during its historic five-year mission that starship undertook. From 2269 to 2270, Arex served as one of the ship's primary navigators.

While under the influence of Harry Mudd's love potion, Arex sat at the navigator's station playing a lute instead of attending to his duties. (TAS: "Mudd's Passion")

Upon the Enterprise's encounter with spiroid epsilon waves, he was momentarily blinded, but suffered no permanent vision damage. Later, he reported that he could no longer perform visual sweeps, as his eyes were too small for the opticals. (TAS: "The Terratin Incident")

He was given the conn following Lieutenant Nyota Uhura's disappearance on the Shore Leave Planet. (TAS: "Once Upon a Planet")

When Commander Spock was incapacitated by choriocytosis, Arex assumed his duties at the Enterprise's science station in 2270. (TAS: "The Pirates of Orion")

While the rest of the command crew was having a staff lunch, Arex was temporarily in command of the Enterprise. He later took his lunch break with M'Ress, asking Montgomery Scott if he wanted to join them. Shortly after, Scott blamed them for the malfunctioning food dispensers and threatened to report them to the captain, but Arex maintained their innocence. (TAS: "The Practical Joker")

When the Enterprise entered a negative universe in 2270, Arex began to grow younger, eventually becoming a child. His condition was reversed by Dr. McCoy using the ship's transporter. (TAS: "The Counter-Clock Incident")

He was a jack-of-all-trades...

In 2381, two photographs of Arex were among those displayed on the walls of a bar at Starbase 25. (LD: "An Embarrassment Of Dooplers") 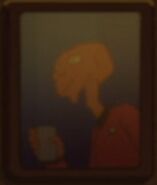 Including Arex in The Animated Series accomplished two goals: it provided variety with yet another "alien" crewmember that an animated series could afford, and it replaced Pavel Chekov without employing an additional actor.

Although Arex is clearly shown to be a navigator, production art sketches of Arex described him as the helmsman. (Star Trek: The Official Guide to the Animated Series, pp. 28, 46-47) Additionally, the final draft script of "Mudd's Passion" refers to him as "the alternate helmsman". In the same script, Arex is also described as "male, but his voice has a soft, musical tone… on the tenor side." Said voice file info was provided by James Doohan.

According to StarTrek.com, [1] Arex was Pavel Chekov's navigation instructor at Starfleet Academy. This information comes from a 1973 newsletter by Gene Roddenberry and D.C. Fontana, which described the Animated Series in general, and gave detailed bios of Arex and M'Ress. It also states Arex is a veteran and known as the best navigator in Starfleet. He began his career as a technician serving on merchant vessels, and not going through Starfleet Academy, he became an officer via "field commission". "While Arex appears to be a quiet, efficient, junior officer, Captain Kirk knows the Lieutenant is entitled to wear three decorations for bravery and has a Starfleet Citation for Conspicuous Valor. Arex himself would never mention them." [2]

Arex appeared briefly in the novels The Galactic Whirlpool, Time for Yesterday, The Fire and the Rose, and the graphic novel version of The Ashes of Eden. He made several appearances in the first volume of DC's Star Trek comics, which were set after Star Trek IV: The Voyage Home.

He has become a minor character in the Star Trek: New Frontier series, where he serves as a security officer on the Trident under Captain Shelby. In these novels, his full name is given as "Arex Na Eth".

Arex' homeworld Edos was first mentioned in Lincoln Enterprises publicity material in 1974. Arex is referred to as an "Edoan" in Alan Dean Foster's Star Trek Log series of novelizations. According to the Star Trek: New Frontier novels, Arex is described as a Triexian, a species sometimes mistaken for Edosians. The Latter Fire also corroborates this.