Nog; Kar; News vendor; Holosuite Guest; Nog (mirror)
"I'll always carry that love for the show with me, wherever I go. And when I get to go to Star Trek conventions and meet the fans, and they say how much they love the the show, and then I see their kids, that are ten going 'Oh, Nog's great, I love Nog,' I'm like man, look at this. I'm part of this. I will forever be a part of this. And no one can take that away from me. So, when you ask me what I've left behind, I can't think I've left anything behind, because it's still here with me. Every day."
– Aron Eisenberg (What We Left Behind)

Eisenberg reprised his role as Nog in Star Trek Online beginning in the Season 10 mission "Time in a Bottle", released June 18, 2015. He also appeared in subsequent episodes of "Season 10: The Iconian War", and in the expansion "Victory Is Life" in 2018.

Born in Hollywood, California, USA, Eisenberg underwent a kidney transplant when he was a teenager, which stunted his growth at 5 feet. Eisenberg's oldest son Nicholas Lawrence Eisenberg was born 25 April 1997. His other son is Christopher Eisenberg.

Eisenberg made his first acting appearance in the 1989 movie Beverly Hills Brats, in which Whoopi Goldberg made a cameo appearance and Star Trek stunt coordinator Dennis Madalone played a store clerk. Also in that year, he starred with Lawrence Tierney in The Horror Show. His last movie of that year was Amityville 4: The Evil Escapes, also starring Warren Munson. He appeared in the 1990 movie Playroom, directed by future Star Trek: Enterprise writer Manny Coto. He also starred in Streets that year. In 1991 he starred in Prayer of the Rollerboys and Puppet Master III: Toulon's Revenge with future DS9 guest stars Ian Abercrombie and Matthew Faison. In 1993 he played alongside Wil Wheaton in The Liars' Club. A year later, he starred in Pterodactyl Woman from Beverly Hills and in 1998 with Leonard Nimoy, Miguel Ferrer, and Daniel Dae Kim in the television adaptation of Brave New World.

He died from heart failure on 21 September 2019, [1] the same day as Star Trek: The Original Series actors Jack Donner and Sid Haig. 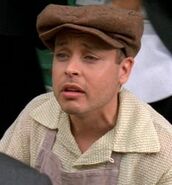