The Atlantic Ocean was an Earth ocean. The equator, a line of latitude which passed through this ocean, divided it into two parts, the North Atlantic Ocean and the South Atlantic Ocean. Four continents - Europe, Africa, South America, North America - had coastlines on this ocean, the latter's coastline known as the East Coast. An underwater mountain range, the Mid-Atlantic Ridge, bifurcated the ocean floor. (TOS-R: "The Cage"; TNG: "Family")

In May 1932, Amelia Earhart became the first female aviator who flew solo across the Atlantic. (VOY: "The 37's")

In an alternate 1944, after conquering England, the forces of Nazi Germany crossed the Atlantic and invaded the northeastern United States. The ocean itself was labeled on the map of the United States of America that showed the progress of the Nazi's campaign on the North American continent. It was described there as Atlantischen Meer (Atlantic Sea). (ENT: "Storm Front", "Storm Front, Part II")

In the mid-20th century, the South Atlantic Ocean was seen on the photograph "The Blue Marble". (TOS-R: "The Cage")

In the late 20th and early 21st centuries, the cruise liner RMS Queen Elizabeth 2 ferried passengers across the Atlantic between the continents of Europe and North America. One of these passengers was Ralph Offenhouse. (TNG: "The Neutral Zone")

In an alternate 2154, the Xindi weapon fired at the Atlantic Ocean, setting off a chain reaction that destroyed Earth. (ENT: "Twilight")

A 21st century-era political map of Earth was stored in the USS Enterprise's library computer in 2254. The Atlantic Ocean was seen on this map. This map was among the materials viewed by the Talosians when they scanned the Enterprise computer. (TOS-R: "The Cage")

By the 24th century New Martim Vaz, an aquatic city, had been established in the Atlantic. (TNG: "The Survivors")

In 2367 the New Atlantis Project was initiated to create a new habitable landmass in the Atlantic Ocean. (TNG: "Family")

For the remastered "The Cage", a Central Intelligence Agency map was used, It was published either in April 2007[1] or September 2008.[2] The difference, which was not noticeable at the resolution of the image from the episode, was the addition of Kosovo, which gained its independence between the releases. The labels "North Atlantic Ocean" and "South Atlantic Ocean" were illegible to the viewer.

Several 20th century-era maps and diagrams depicting the Atlantic Ocean, or portions of it, were stored in the USS Enterprise library computer in 2254. These included a diagram of the polar orbit of Nimbus 1, a continent projections map, an eastern hemisphere map, a political map of the northern hemisphere, and an orbital map. These maps were among the materials viewed by the Talosians when they scanned the Enterprise computer. (TOS: "The Cage") 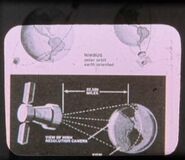 Atlantic Ocean on a map of Earth's continents.

South Atlantic Ocean on a map of Earth's eastern hemisphere.