An automobile was a type of land vehicle used by a variety of species from different planets. They were used primarily for transportation of people, goods, and materials.

On Earth, automobiles were seen as a source of status and virility. They were "often a prime ingredient in teenage mating rituals." (TNG: "The Big Goodbye")

Many automobiles were powered by internal combustion engines, which were fueled by fossil fuel. However, this may have not been the case by the year 2061, although the records are unclear. (ENT: "Carpenter Street")

Typically, automobiles were self-propelled vehicles designed for land-based travel. The hovercar, which is an automobile capable of traveling above the ground, came around in the 2030s, but still didn't completely replace traditional automobiles, which were around at least as late as the 24th century. (VOY: "The 37's"; Star Trek Nemesis)

In San Francisco in the year 1893, a bellboy named Jack London went across town to get a time warped Data some parts for a machine he was building. The bellboy believed that he was building a motor for an automobile, or "horseless carriage". He asked Data if he thought there was money in that business. He then asked Data if Data would like to build the vehicles, and then he could sell them for him. (TNG: "Time's Arrow")

The Ford Model T was considered the first production model automobile of the 20th century. (TNG: "A Matter of Time")

In 1968, Agent 347 and Agent 201 were killed in an automobile accident on Highway 949, just ten miles away from McKinley Rocket Base. Gary Seven found it terribly sad that they had been killed by a mere accident, rather than the line of duty. (TOS: "Assignment: Earth")

At the 2003 State of the Union Address, George W. Bush mentioned his plans for introducing hydrogen automobiles. (ENT: "Future Tense")

When Klaang was brought to San Francisco after being shot in Oklahoma, a number of automobiles can be seen driving across the San Francisco-Oakland Bay Bridge in the nighttime skyline. (ENT: "Broken Bow")

In 22nd century Valakis, automobiles were a common sight on the streets and bridges of that world. (ENT: "Dear Doctor")

In 2152, there was a Jeep that was patrolling Detention Complex 26 in the Tandar sector. (ENT: "Detained")

In Hoshi Sato's fear induced dream, Doctor Phlox told her that when automobiles were first invented people likely had experienced the same fear that she was facing regarding transporter technology. (ENT: "Vanishing Point")

After Jonathan Archer restored a damaged timeline, an early automobile was seen in the time stream as the timeline realigned itself. (ENT: "Storm Front, Part II")

In San Francisco in the year 2154, when Jonathan Archer went to a bar where he ran into Hernandez; a number of automobiles could be seen driving across the San Francisco-Oakland Bay Bridge in the nighttime skyline. (ENT: "Home")

That same year, just before Hoshi Sato and Doctor Phlox left Madame Chang's Mandarin Cafe, a number of automobiles could be seen driving across the San Francisco-Oakland Bay Bridge in the San Francisco skyline. (ENT: "Affliction")

In the 2240s in the alternate reality created by Nero's incursion, young James T. Kirk was chased by a policeman after he went joyriding in his late father's convertible. Kirk nearly went over a cliff in the vehicle. (Star Trek)

In 2255 of the alternate reality, when a young Jim Kirk was at the Shipyard Bar, and many bar patrons were Starfleet cadets, there were a number of automobiles in the parking lot. There was also an automobile driving down the street, passing the building. (Star Trek)

In Paris in 2257 when Michael Burnham was informed by Sarek that the President of the United Federation of Planets gave her a full pardon, a number of automobiles were driving on nearby roads. (DIS: "Will You Take My Hand?")

On the planet 892-IV of the System 892, an internal combustion engine driven automobile, called the Jupiter 8, was manufactured in 2268. (TOS: "Bread and Circuses")

On the Federation colony planet Omicron Ceti III, there were no automobiles or any other vehicles used by the settlers of the planet, as it wasn't thought to be necessary, because the purpose of the colony was to "return to a less complicated life." (TOS: "This Side of Paradise")

In the 2270s, large tubes were used on the Golden Gate Bridge for automobile traffic, tubes which were not in place when the bridge was originally constructed. (Star Trek: The Motion Picture)

In 2285 at the San Francisco bar, a Federation Security agent offered to give Doctor McCoy a ride home, giving the implication that the doctor was too drunk to drive an automobile. The real reason he offered him a ride home was because McCoy was negotiating payment to an alien that he was going to hire to get him off-world to the forbidden planet known as Genesis. After the security agent asked him for a ride McCoy answered: "What's the logic in offering me a ride home you idiot?! If I wanted a ride home, would I be trying to charter a spaceflight?!" (Star Trek III: The Search for Spock)

In 2364, Captain Jean-Luc Picard sees automobiles in the streets of New York City in his Dixon Hill holoprogram. Later, when he is telling his crew about them in the observation lounge, Worf misunderstands the captain, thinking he said "otto-moveels." Data then tells Worf he is referring to an "ancient Earth device, used primarily for transportation." He goes on to say that they were often seen as a source of status and virility, and often a prime ingredient in teenage mating rituals. (TNG: "The Big Goodbye")

In 2365, while the Enterprise away team was in a hotel modeled after the main setting of Hotel Royale, Texas told Data that he had a '91 Cadillac. Data then asked him where his automobile was at. He then told him it was located "out front, I suppose. What the hell difference does it make?" (TNG: "The Royale")

In 2366, when Captain Jean-Luc Picard and Commander William T. Riker was taking a tour of the capital city on Angosia III, three automobiles could be seen driving down a street. (TNG: "The Hunted")

In 2369, when Commander Benjamin Sisko visited Kai Opaka on Bajor for the first time, two automobiles were driving by on streets in the Bajoran capital's skyline. (DS9: "Emissary")

One type of automobile, called a ground assault vehicle, was used by the Klingon Empire, and it was mounted with a targ scoop, a device which emitted a high frequency to disperse large herds of targs so as to clear a path for the vehicle. (VOY: "Elogium")

In the year: 2372, in an alternate timeline in which Harry Kim never joined the crew of the USS Voyager; a number of automobiles were parked along the edge of a street in one of Marseille's waterfront areas. (VOY: "Non Sequitur")

In 2376, while playing the Fair Haven holoprogram, Tom Paris crashed his automobile and lost a wheel, apparently due to a clutch malfunction. (VOY: "Spirit Folk")

In 2399, there was a bridge in Stardust City on the planet Freecloud that was flooded with automobile traffic. (PIC: "Stardust City Rag")

In 3189, the crew of the USS Discovery watched a silent film called Sherlock Jr. in the shuttlebay, which had a scene with antique automobiles of the 1920s shown parked on the street. (DIS: "Forget Me Not")

Sometime in the far future, a man named Craft was forced to watch a cartoon called Snow-White 811 times. An old-fashioned automobile with a skeleton in it was shown in the cartoon during the scene where the seven dwarfs were carrying Betty Boop in her ice coffin. (ST: "Calypso")

A Chevrolet Suburban in 1953

Automobiles driving down a New York City street in 1968

Automobiles driving down the Golden Gate Bridge in 1986

A Jeep on Carpenter Street in 2004

Iotian cars on the streets of Sigma Iotia II in 2268 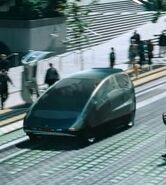 An Earth vehicle in San Francisco in 2259

An automobile in a Betty Boop cartoon.

In a deleted scene from "Home", it is mentioned by Trip about his grandfather, who may have been Charles Tucker I, or possibly the grandfather on his mother's side. He said that when he "turned eighty, he gave up his business. They practically had to drag him from his garage. He repaired antique automobiles...."