The autosuture was a medical device, descended from the 20th century suture, that was used as early as the 22nd century. By the late 24th century this technology was laser-based. (VOY: "The Cloud")

The function of the autosuture is to seal closed and promote the healing of wounds from surgery or deep trauma by stimulating the patient's own anabolism. It is used where the dermal regenerator is inadequate.

Doctor Phlox used an autosuture during his operation on Porthos in 2152. It was used to secure the placement of the pituitary gland he transplanted from a Calrissian chameleon. (ENT: "A Night in Sickbay") Shortly thereafter, he traded his autosuture, among other things, for deuterium. (ENT: "Marauders")

Dr. Beverly Crusher used an autosuture to treat Captain Jean-Luc Picard after he was stabbed in the chest by Jono. (TNG: "Suddenly Human")

Dr. Julian Bashir used an autosuture to repair an injury to Martok's shoulder during a training exercise with Worf. While the repair was general, had the wound been three centimeters to the right, Martok's brachial artery would have been severed, causing much greater damage than an autosuture could repair. (DS9: "Soldiers of the Empire") 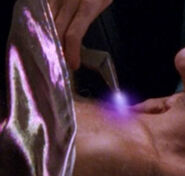 Autosuture, 2373
Add an image to this gallery
Retrieved from "https://memory-alpha.fandom.com/wiki/Autosuture?oldid=2406702"
Community content is available under CC-BY-NC unless otherwise noted.