She has appeared on Star Trek: Discovery as two recurring Osnullus characters: an Osnullus bridge officer and an Osnullus science officer throughout the three seasons of the series. In the third season, she appeared as a human recurring character, Ina.

She also appeared as an Osnullus trader in "That Hope Is You, Part 1". [1] and the Osnullus captain Rahma in "Scavengers", which was her first speaking role on the show, for which she received her first on-screen credit.

She posed in Klingon make-up as Hugo Villasenor's model during an IMAT make-up show. [2] [3]

She can be seen in EFC as Scarlett Jones, 12 Monkeys as "Alabaster Woman", and other cult classic films. 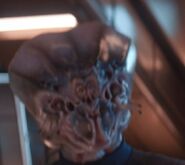 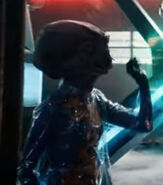 Osnullus trader
DIS: "That Hope Is You, Part 1"
(uncredited) 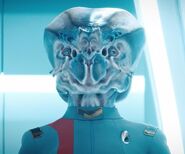 Retrieved from "https://memory-alpha.fandom.com/wiki/Avaah_Blackwell?oldid=2733385"
Community content is available under CC-BY-NC unless otherwise noted.