The sequel to the New York Times bestseller The Return.

Avenger is a Pocket TOS novel – the third novel in the retroactively designated Odyssey trilogy – by William Shatner, with Judith and Garfield Reeves-Stevens. Published by Pocket Books, it was first released in hardback in May 1997. The novel continues the story of the revived James T. Kirk.

From the book jacket
A lethal virus, inimical to all conventional forms of plant life, threatens the entire Federation with starvation and dissolution. With the Federation already on the brink of overpopulation, Starfleet's resources are stretched to the limit. Whole worlds and even complete star systems are placed under quarantine, causing interstellar food supplies to run dangerously low, and hostile alien empires to eye the weakened Federation with malevolence. But now, in this moment of Starfleet's greatest need, Captain James T. Kirk, long believed dead, embarks on a desperate quest to find the true source of the mysterious virus.

Elsewhere in the galaxy, Ambassador Spock, his diplomatic efforts stalled by the spread of famine and chaos, returns to his native world of Vulcan to confront a mystery of a deeply personal nature. Did Sarek, his legendary father, really die of natural causes--or was he murdered? Determined to the learn the truth, Spock begins a highly logical investigation that soon leads him to a reunion with a long-lost friend he never expected to see again.

Kirk and Spock, together again, must join forces to save a new generation from an awesome menace unleashed by a ruthless interplanetary conspiracy.

A "virogen" has infested several Federation worlds, disrupting the food chain, and is rapidly spreading. Starfleet's resources are stretched to the breaking point attempting to keep the affected systems blockaded so the virogen doesn't spread any further and attempting to keep their populations from starving to death. Jean-Luc Picard and the USS Enterprise-E are assigned to a blockade of the Alta Vista system, home to the Gamow Station, a research facility designed to house about sixty scientists that is temporarily being used as a refugee camp for 1,400 people. A ship attempts to run the blockade; its small crew destroys the ship rather than be sent back to the overcrowded station – or do they?

James T. Kirk suddenly reappears on the world of Chal, which has also been quarantined because of the virogen. He is there to visit Teilani's grave – only he learns that she is not dead. However, she is dying of the virogen, which affects the chalchaj'qmey (Children of Heaven) far more seriously than it does other humanoids because of their artificial genetic structure, and she probably has less than a day to live. Kirk cures her with a herb whose origin he does not know. In trying to learn the origins of this plague, Kirk has the commander of the Starfleet rescue mission on Chal transmit a request for information to Starfleet Command. Chal is attacked by Orion fighter craft flown by pilots of a different – and alarming – race.

On Babel, Spock learns that his father, Sarek, who was thought to have died of Bendii Syndrome, was actually murdered in some way to make it appear as though he had Bendii. Spock becomes enraged and decides it is up to him to find out who murdered his father – and why.

The answers to Picard's, Kirk's, and Spock's mysteries are all found on the same planet – Vulcan. 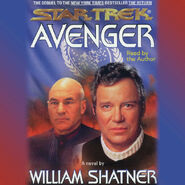 Canon characters listed below are linked to the main article about them. Non-canon characters are not linked, but those that recurred, appearing or being mentioned in more than one story, are defined further in non-canon characters.
Stron
A Vulcan who tries to run the blockade of the Alta Vista system, along with his pregnant Human wife; when the Enterprise catches them in its tractor beam, the ship tries to go to warp and seemingly blows up.

Chiton Kincaid
A Human from a low-gravity world, extremely tall and thin, she is the commander of Gamow Station on Alta Vista III and a member of an eco-terrorist group.

Teilani (β)
The same woman who Admiral Androvar Drake tried to use to distract Kirk in The Ashes of Eden. Kirk returns to Chal to visit her grave, only to learn she is not dead yet; he saves her from death with a herbal remedy.

Christine MacDonald (β)
Commander of USS Tobias, assigned to help the people of Chal, who are particularly vulnerable to the virogen. She also hero-worships James T. Kirk, who suddenly appears on Chal with a possible cure for the virogen – two years after he supposedly died on Veridian III, was (non-canonically) resurrected and died again fighting a Borg-Romulan alliance in The Return.

Ki Mendrossen
Sarek's former chief of staff (TNG: "Sarek"), who sends a holographic message to Spock confessing to spying on Sarek and of complicity in his murder; the message ends with Mendrossen committing suicide.

Srell (β)
Grandson of T'Pring and Stonn; Spock's personal aide, who assists Spock in his informal investigation of Sarek's murder.

Tarok (β)
A Vulcan trader and old friend of Sarek; Spock knew him as "Uncle Takta" while growing up. Unlike most Vulcans, Tarok did not attempt to suppress his emotions, though in public he still behaved in the typical detached Vulcan way. Tarok, now aged 205, is afflicted with Bendii syndrome, but is just lucid enough to provide Spock with a few more clues regarding his father's death before his estate is attacked and he is killed, along with his (Klingon) nurses.

Vulcan magistrate
She orders MacDonald, M'Benga, Barc, Kirk (posing as an officer from the Tobias), Spock, and Srell held in a spacedock jail after they are connected with the attack on Tarok's estate. Spock manages to royally tick her off by calling her a junior functionary and implying that she's interfering with an important Starfleet mission classified "above the level of this office." As they are escorted to their cells, they hear the magistrate breaking the staff of her office in frustration.

Hugh
A member of a tribe of ex-Borg who have managed to renounce their implants. The tribe lives on a world that contains a sort of Borg garbage dump. The tribe saves drones from the dump who are damaged but not fatally harmed. They remove the drones' implants and nanoprobes and give the ex-drones new purpose. (It is not known if this is the same Hugh that appeared in TNG: "I Borg", "Descent", "Descent, Part II"; it is said that half the tribe's members called themselves Hugh.)

Solok
A representative of the Vulcan government sent to protest Picard's declaration of war against an unspecified enemy, believing that the declaration is directed against Vulcan.

T'Pring (β)
Spock's devious ex-fiancée (TOS: "Amok Time"), now a representative of the Vulcan government and a secret member of an eco-terrorist organization.

Stonn (β)
T'Pring's husband (TOS: "Amok Time") and a representative of the Vulcan government and also a secret member of an eco-terrorist organization.

Amanda Grayson (β)
Spock's mother explains in a holographic message, recorded shortly after Spock went to Starfleet Academy but intended to be played after she and Sarek died, how she and Sarek inadvertently found themselves involved in an eco-terrorist organization.

Kodos (β)
The governor of Tarsus IV, a colony world. When a fungus poisoned the food supply, Kodos orders half the colonists executed in order to save the other half. Kirk, who happened to be on Tarsus IV at the time, witnessed these executions. Despite all this, Kirk finds himself to some extent identifying with Kodos and understanding his behavior when he came aboard the Enterprise during Kirk's first five-year mission (TOS: "The Conscience of the King").

Retrieved from "https://memory-alpha.fandom.com/wiki/Avenger?oldid=2499076"
Community content is available under CC-BY-NC unless otherwise noted.