Azrak-Hamway International, Inc., popularly known as AHI, was an American toy company that was founded in New York City, NY in 1964. It was primarily known as a producer and distributor of "dime-store" toys that were intended to be retailed from merchandising racks.

In 1974, the company acquired the bankrupt toy company Remco and began to re-release many of its licensed Star Trek toys under the AHI Toys and Remco Toys brands, following in the wake of the success of Mego's Star Trek toy lines.

From the mid-1970s onward, the company also produced a number of new Star Trek products, though many were re-purposed toys and novelties that had been taken from existing (and unrelated) product lines, a somewhat questionable industry practice known as "label slapping" that had been inherited from its predecessor, Remco. (The Toys That Made Us)

Several items from Azrak-Hamway's Star Trek toy line are featured in the 2018 "Star Trek" episode of the Netflix series, The Toys That Made Us. 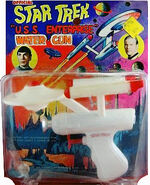 Skydiving Spock toy
Add an image to this gallery

Retrieved from "https://memory-alpha.fandom.com/wiki/Azrak-Hamway_International?oldid=2396698"
Community content is available under CC-BY-NC unless otherwise noted.