Ba'ku was an inhabited planet located inside the Briar Patch, in Sector 441, a region of space in the Alpha Quadrant. It was the adopted homeworld of the Ba'ku, a humanoid race. The planet's rings produced a unique form of metaphasic radiation that granted those on the surface health and eternal life.

In 2256, the location of Ba'ku was labeled on the star chart "Alpha/Beta Quadrant Overview" in the ready room aboard the USS Discovery. (DIS: "Magic to Make the Sanest Man Go Mad")

In 2399, the location of Ba'ku was labeled on a star chart that was in Fleet Admiral Kirsten Clancy's office at Starfleet Headquarters. (PIC: "Maps and Legends")

The planet was settled in 2066 by a small group who had fled their star system, fearing that their civilization was headed for self-destruction. Coming to call themselves the Ba'ku, they established an agrarian society without advanced technology. In the mid-23rd century, a group of young Ba'ku who wished to follow the ways of the offlanders were exiled from the planet after a failed attempt to take over their village. They became the Son'a. (Star Trek: Insurrection)

In 2257, during the first Federation-Klingon War, this star's system was occupied by the Klingons. (DIS: "The War Without, The War Within")

In 2375, there were six hundred Ba'ku living on the planet. As the Briar Patch was now Federation territory, the Son'a colluded with elements of Starfleet to relocate the Ba'ku and collect the metaphasic particles from their planet, which would have destroyed all life on the surface. These plans were thwarted by the crew of the USS Enterprise-E. The Federation Council subsequently halted the relocation plans while a top-level review was conducted. Meanwhile, the Son'a and the Ba'ku began the process of reconciliation.

A rich variety of flora and fauna were found on Ba'ku. Near the Ba'ku village, there were hills and mountains containing veins of kelbonite, which blocked transporter function. The mountains contained caves that could shelter large numbers of people. (Star Trek: Insurrection) 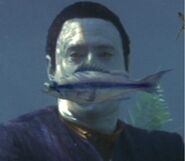 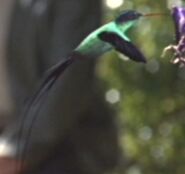 Rhyl
Furthermore, a book produced for the film but of which only the cover was seen on screen depicted a number of other lifeforms, including animals similar to a pterodactyl, a turtle, and a butterfly.

The script for Star Trek: Insurrection, as well as the Star Trek Encyclopedia (4th ed., vol. 1, p. 57), identified Ba'ku as a class M planet. A line from Troi would have made this explicit, but was deleted from the final film. A further deleted scene would have established that the Federation would ultimately make Ba'ku a protectorate.

Exterior scenes in the Ba'ku village were filmed on the shore of Lake Sherwood in southern California on a quiet inlet to the south of the lake. The exact coordinates are 34.135038, −118.865526. A luxury housing development was built over the location in 2017, now gated to visitors and inaccessible.

Herman Zimmerman's concept designs for the Ba'ku village, described in an early version of the script as "a rural community along a vast sparkling lake," was inspired by several cultures along the Pacific Rim. One image of a hotel in Bali in particular sparked Zimmerman's and Rick Berman's direction for the design. (Star Trek: The Magazine Volume 1, Issue 1, pp. 30-31)

According to the RPG sourcebook Planets of the UFP, Ba'ku's native fauna includes a bird with a bee-like stinger called the jenkaw and a llama-like animal called the e'kar.