The uniforms of the Bajoran Militia (and associated support personnel) were introduced after the withdrawal of the Cardassians from Bajor in 2369, and were worn in service through at least 2375. (DS9: "Emissary", "What You Leave Behind")

Both male and female versions of the standard Militia duty uniform consisted of a two-piece uniform (with an optional belt) and color-matched boots; rank insignia was worn on the left collar, and a combadge was worn on the right breast. Security chiefs and their deputies generally wore uniforms without collars, and therefore did not display any rank insignia. (DS9: "Emissary") Constable Odo began to wear a collar on his uniform in 2371, but held no official rank to display. (DS9: "The Search, Part I")

The duty uniforms were characterized by division. The primary section of the standard uniform consisted of a ribbed, corduroy-type material, with quilted shoulders and sleeves displayed in a secondary color. White, vented undershirts were worn under the uniform jacket. Members of the command division wore red uniforms with maroon shoulders; the security team wore brown uniforms with tan shoulders; engineering and operations staff wore silver with grey. (DS9: "Emissary") Some members of the Deep Space 9 engineering staff wore green uniforms with gray shoulders. (DS9: "Bar Association", "The Assignment")

The primary fabric used in the duty uniforms was Inkarian wool, which was known for being "uncomfortable" and "itchy" to first-time wearers; when Garak fabricated a new uniform for Odo in late 2372, he told the constable that he'd "get used to it." (DS9: "Sons of Mogh", "Broken Link") 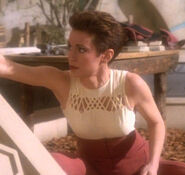 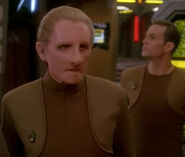 Security brown, both with and without optional collar (2372)

In late 2369, the Militia introduced variant uniforms for senior officers. Major Kira Nerys began to wear a tighter-fitting, one-piece version of the standard female Command-division uniform. (DS9: "The Forsaken") In early 2372, she started wearing a sleeker one-piece uniform, with a smooth primary section, waffle-fabric sleeves, and a belt similar to her previous uniform. (DS9: "Hippocratic Oath") After being promoted to colonel in 2375, Kira wore a similar uniform to her previous Major design, with waffle-fabric extending upwards from the mid-waist and covering the arms. (DS9: "Image in the Sand")

Flag officers in the Bajoran Militia, including officers ranked general and navarch, wore more formal versions of the standard duty uniform. Colored the same silver as the regular Operations-division uniform, the quilted gray shoulder covering on this version of the uniform extended across the entire upper chest. Generals wore special patches on their shoulders. (DS9: "The Circle", "The Siege")

The Militia dress uniform was a variant of the standard duty uniform. It was worn for special occasions such as weddings, courts martial, funerals, and the greeting of ambassadorial delegations and heads of state.

The female version of the uniform included a coat which extended to the mid-thigh, and wrapped around the wearer to secure at the right side with a silver brooch-like device. Boots and leggings that matched the coat were also worn. Command officers who normally wore burgundy color duty uniforms wore pale purple dress uniforms. Combadge and rank insignia were worn on the dress uniform in the same position as the duty uniform. (DS9: "Rejoined", "Crossfire", "Sons and Daughters", "You Are Cordially Invited")

Kira Nerys is the only member of the Bajoran Militia seen wearing this dress uniform; dress uniforms for members of the operations or security divisions (or command officers of lower ranks) may be of different designs.

Maternity versions of the senior officer uniforms were also available, consisting of a separate uniform top that flared out below the waist. After becoming a surrogate mother to Kirayoshi O'Brien in late 2372, Kira Nerys wore this uniform until his birth in mid-2373. (DS9: "Body Parts", "The Begotten") 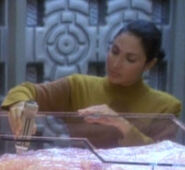 Nurses and medical assistants working in the Deep Space 9 infirmary wore one-piece, two-colored uniforms with a design emulating the standard duty uniform. A design worn through early 2369 featured a brown midsection with mustard-yellow shoulders and leggings, (DS9: "A Man Alone") but a replacement design consisting of a purple midsection with tan shoulders and leggings soon replaced it. (DS9: "Babel")

A variation on the brown and yellow design was used in early 2369 by medical support staff. (DS9: "Past Prologue")

This uniform was seen briefly in this episode, and was not reused. 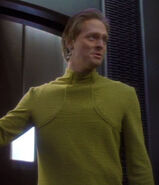 Patients in the Deep Space 9 infirmary were issued green, two-piece gowns when undergoing care in 2369, with embroidered shoulder areas emulating the design of the standard duty uniform. (DS9: "Past Prologue"). In 2370, the green gowns were replaced with flowing purple gowns featuring wide orange bands crossing the shoulder areas. This style of gown was used through at least 2375. (DS9: "Armageddon Game", "Whispers", "The Wire", "Chrysalis")

Bajoran ranks were designed after the Bajoran emblem, and were primarily worn on the officer's left collar. (DS9: "Emissary") Generals wore two rank insignia: one on each collar. (DS9: "The Siege")

The Bajoran Militia uniforms were designed by Robert Blackman and Ricardo Delgado. (Star Trek: The Magazine Volume 1, Issue 9, p. 26) Two of the colors were rust and gray. (The Making of Star Trek: Deep Space Nine)

Several Bajoran uniforms and uniform components were sold off on the It's A Wrap! sale and auction on eBay, including a red uniform worn by Scott Barry, [1] boots, [2] [3] belts, [4] and other costume extras. [5] [6] [7] A pair of boots has a "College Comfort" name tag on it and the interior features a tag "Siberian Husky".