The Bajoran language (also known as Modern Bajoran) was spoken and written language of the Bajorans of Bajor, descended from Ancient Bajoran.

The Bajoran written language consisted of square symbols composed of thick lines. Bajoran tended to be written in horizontal lines, although it could be written vertically. (DS9: "Shadows and Symbols")

Bajoran writing was said to be ideographic, in that each character represented a single thought or word. Most forms of written Bajoran shared some root ideograms, as evidenced by the Reckoning Tablet. Each ancient Bajoran symbol translated into a pair of nearly identical modern Bajoran symbols. (DS9: "The Reckoning")

Bajoran books opened from left to right, though it is not clear that this is related to the direction of writing. (DS9: "The Changing Face of Evil")

Keiko O'Brien's classroom featured a chart depicting the English, the Ferengi, the Cardassian, and the Bajoran alphabets. The chart listed some twenty-five Bajoran language symbols. (DS9: "The Nagus", "In the Hands of the Prophets", "Cardassians") 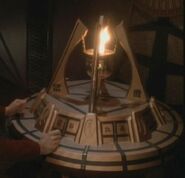 On a duranja prayer lamp

Bajoran & English script on a PADD

On a Bajoran weapon scope

This translation comes from the script. [1]

Lata impara no takash... Veshanoo yavar ha iktasho.
With humility and gratitude, we accept this gift... the sacred Orb of Prophecy.

(Prayer leader) Tera dak ihsehelm ran embah...
(ALL) de-ram ta-MEEN!
Chanted by Kai Winn and fellow Bajorans in the hours before the Reckoning. (DS9: "The Reckoning")

The spoken Bajoran language was often written by Ronald D. Moore. "I just make it up," he laughed. "I do it phonetically so it has a certain rhythm and sound in my head that I can tag as the way Bajorans sound." In scripts, Moore also provided an English translation of each verbalized use of the language, for the benefit of the actors. (Star Trek: Deep Space Nine Companion (p. 244))

The Bajoran script was designed by Doug Drexler, who was senior scenic artist for Deep Space Nine. [2](X)

A Bajoran navigation device used in "Explorers" that featured Bajoran script was auctioned as part of the It's A Wrap! sale and auction. [3]