Founded in 1950 to produce tin toys, Bandai has become the world's fourth largest toy producer (behind Lego and US companies Mattel and Hasbro) with holdings and subsidiaries all over the world. In 2005, Bandai merged with video game developer and producer Namco (best known as the makers of the Pac-Man video game) to become Namco Bandai Holdings, Inc., also known as the Bandai Namco Group.

Prior to its merger with Bandai, a number of Galoob's Star Trek Micro Machines starship miniatures were retailed by Namco in Japan and carried its brand logo on the windowbox packaging, which also bore the Galoob and Tsukuda Hobby logos. Some of the Tsukuda Group's divisions were later acquired by Bandai.

The company was also the maker of the Pair Match electronic game, which was seen on episodes of Star Trek: The Next Generation.

Bandai also began to produce a Star Trek V: The Final Frontier video game in 1989 for use with the Nintendo Entertainment System but the game was not fully completed nor released to retail.

The company published the Star Trek video game developed by Digital Extremes for the Playstation 3, Xbox 360, and Windows platforms in April, 2013. 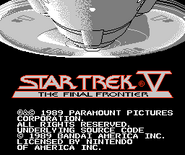 In 2011, Bandai began releasing a series of "deck-building" card games based on Star Trek. The basic mechanics of the game allow each player to construct a constantly-changing deck of cards, and using said cards to complete missions, battle & repair ships in order to accomplish a set goal (earn a set number of points, defeat a common enemy, etc.). To date, three such sets have been released by Bandai:

Bandai has also released special sets of "promo cards" that can be added to the game decks to enhance play.

Bandai produced a small line of Star Trek model kits during 2003 and 2004 which featured pre-painted, "snap-fit" (meaning no glue is required for assembly) models with lighting kits included. What made these kits remarkable was that they were Bandai originals and not in any way associated with the releases from the then-licensed traditional model kit producers AMT/Ertl, Revell-Monogram and Polar Lights, as their model ships were (re-)designed and manufactured from the ground up in scales differing from those of the previous model kit versions.

Bandai's designers were given access to the original studio models for their research and had the input of their Star Trek designers John Eaves, Rick Sternbach, and Doug Drexler. Their comments were included in the elaborate instruction sheets which helped the modeler to more accurately build the models. Unlike many original Japanese productions which are normally intended for the home market, these kits were from the outset created to become international releases with the instruction sheets translated into five languages.

Despite the steep retail price (and even higher prices still, as later commanded on after-market sites such as eBay), collectors valued the Bandai releases for their high level of accuracy and the assembly quality of the kits, deeming them both superior to those of their traditional prior counterparts (see the individual item links).