Template:Realworld Tall and statuesque actress Barbara Babcock (born 27 February 1937; age 83) has enjoyed a long Hollywood career that includes roles in nearly thirty movies, regular roles in a half-dozen or so television series, about sixty guest appearances, a number of which were repeat appearances for her character, and a number of stage appearances.

Babcock had a recurring role on the hit TV series Dallas from 1978 through 1982. She won an Emmy Award for her role as Grace Gardner in the TV series Hill Street Blues. She is most recently known to television viewers for the series Dr. Quinn, Medicine Woman, for which she also received an Emmy nomination. She also co-starred with Jerry Orbach in the 1987-88 series The Law & Harry McGraw.

Mea 3
"A Taste of Armageddon" 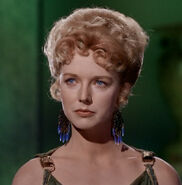 Retrieved from "https://memory-alpha.fandom.com/wiki/Barbara_Babcock?oldid=1654271"
Community content is available under CC-BY-NC unless otherwise noted.