BarBara Ann Luna (born 2 March 1939; age 82) portrayed Lieutenant Marlena Moreau, as well as her mirror universe counterpart, in the Star Trek: The Original Series second season episode "Mirror, Mirror". She was born in New York City, to a Filipino father and a Hungarian mother. She also has Spanish and Italian roots.

Luna was once a regular on the the daytime soap opera One Life to Live playing leading man Cord Roberts' scheming mother Maria from 1986 through 1987. She has also appeared in several episodes of Buck Rogers in the 25th Century, Mission: Impossible (which, like the original Trek series, was produced by Desilu) and Fantasy Island (starring Ricardo Montalban). In 1973, she appeared as the reluctant girlfriend of hitman Harry Tass, portrayed by Frank Langella, in an episode of the series Mannix. She also appeared in one episode of T.J. Hooker, a series which starred TOS actor William Shatner.

In the second season of the T.V. series Buck Rogers in the 25th Century, Luna appeared as the ill-fated bird woman Koori, wife of regular character Hawk. Her initial appearance as the mortal Koori was in a two-part episode which also featured Sid Haig and David Opatoshu, then she played Koori's spirit in an episode featuring series semi-regular Paul Carr as well as Vic Perrin.

Her feature film credits include Mail Order Bride (1964, with Paul Fix), Ship of Fools (1965, with Michael Dunn) and Firecreek (1968, with Gary Lockwood and Morgan Woodward). 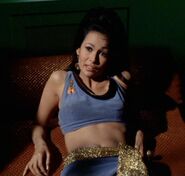