Barry Lynch (born 23 January 1944; age 76) is the New York-born actor who played Starfleet defector DeSeve in the Star Trek: The Next Generation sixth season episode "Face of the Enemy". He also appeared in the video games Star Trek: Klingon and Star Trek: Borg and lent his voice to Star Trek: Klingon Academy.

His other television work includes guest appearances on Miami Vice, L.A. Law (with Corbin Bernsen, Larry Drake, and Lawrence Dobkin), and Judging Amy. He also co-starred with Roxann Dawson and Patrick Kilpatrick in the 1994 made-for-TV movie Greyhounds and with Miguel Ferrer and Brian Keith in 1995's The Return of Hunter.

Lynch is the younger brother of fellow The Next Generation guest star Richard Lynch, who played Arctus Baran in the episodes "Gambit, Part I" and "Gambit, Part II".

DeSeve
TNG: "Face of the Enemy" 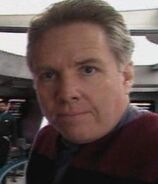 Retrieved from "https://memory-alpha.fandom.com/wiki/Barry_Lynch?oldid=2491999"
Community content is available under CC-BY-NC unless otherwise noted.