Basic Fun is an American company based in Southampton, Pennsylvania that began in 1991 with the creation of working Super Soaker key chains. Since that time, Basic Fun has created over a thousand different key chains and has sold over 65 million products worldwide. The company later expanded into novelty items, toys, and handheld electronic games. Basic Fun became a division of The Good Stuff Company in 2008.

The company produced five licensed Star Trek key chains in 2009. Each key chain measures approximately two to three inches long and is made entirely of plastic, apart from the metal chain. 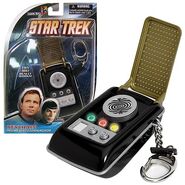 Retrieved from "https://memory-alpha.fandom.com/wiki/Basic_Fun?oldid=2502469"
Community content is available under CC-BY-NC unless otherwise noted.