The Benzites were a species of humanoids native to the Federation planet Benzar.

Benzite contact with the Federation was limited prior to the 24th century, but by 2364, contact had widened and Mordock, creator of the Mordock Strategy, became the first Benzite to join Starfleet Academy, edging out several candidates from Federation worlds, including Wesley Crusher. (TNG: "Coming of Age")

Relations and cooperation between the Benzites and the Federation continued to expand during this time, possibly as a prelude toward Benzar joining the Federation. Officer exchange programs were initiated, allowing Starfleet officers to serve on Benzite ships and vice versa, in order to promote better understanding of the different cultures, regulations, and behaviors. Following in Mordock's footsteps, other Benzites, such as Hoya, eventually enrolled in the Academy. (TNG: "A Matter Of Honor"; DS9: "The Ship")

Benzites were highly meticulous, a characteristic that was reflected in their regulations, one of which stated that no officer on a Benzite ship is to report any unexplained occurrence without providing a full analysis and solution. (TNG: "A Matter Of Honor")

In 2374, during the Dominion War, Benzar was captured by Dominion and Cardassian forces. It was later liberated by Romulans, acting as part of the Federation Alliance. However, Constable Odo expressed concerns that the Romulans would not give up control of Benzar even after the war ended, as it was very rare for them to give up captured territory. (DS9: "The Reckoning")

Benzites typically had smooth, hairless, blue or green skin. A thick protrusion of the Benzite skull extended down over the face, displaying a prominent nasal lobe and brow. Two facial tendrils drooped down from above the upper lip. They were unable to breathe a standard oxygen/nitrogen atmosphere, and as of the 2360s, were required to wear a breathing apparatus in those environments, the use of which was evidently overcome by the early 2370s. (TNG: "Coming of Age"; DS9: "The Ship")

Benzites also had two opposable thumbs on each hand, another unique characteristic of the species. (TNG: "Coming of Age", "A Matter Of Honor")

The makeup department designed the unique feature as the script called for Mordock to be working at a computer. The design simply consisted of a fake thumb that was slipped over the actor's pinkie. (Star Trek: Aliens & Artifacts, p.110)

Benzites were known to develop from a series of large geostructures; those from the same geostructure naturally looked similar. Benzites within these geostructures had the inherent ability to distinguish each other, all of whom would otherwise appear identical to outsiders.

In 2365, when Benzite exchange officer Mendon transported aboard the USS Enterprise-D, Acting Ensign Wesley Crusher noted that he looked identical to Mordock, whom he had met the previous year. (TNG: "A Matter Of Honor")

The first Benzite to appear on-screen was Mordock. All the makeup department had to go on when designing him was a brief description in an early draft of the script for "Coming of Age," which described him as "a powerfully built alien with a special suit using circulating gas tubes." [1] They created one major appliance that covered most of actor John Putch's head and additional pieces that covered his upper lip, chin and eyelids, both of which were an unusual configuration of "puffy eyes" with lids that "folded back on themselves like Venetian blinds." The mouth area and earlobes possessed a set of catfish "feelers" while the overall headpiece was painted blue with oranges and yellows worked in to make the skin color look more lifelike. (Star Trek: Aliens & Artifacts, p. 110)

The script for "Matter of Honor" describes Mendon as "a large, blue-skinned officer from the planet Benzar. He breathes through a special device at his chest which converts the oxygen level to his use. He is young, alert, quick moving and as the nature of Benzites, he is always ready to please and demonstrate his abilities." [2]

According to an internal reference document, listing all the aliens seen in Star Trek: The Next Generation, which was circulated around the time of the production of TNG Season 5, the Benzites were given the description of "As a race, they show a sincere but sometimes annoying eagerness to please that can be perceived as superiority, they strongly resemble each other."

According to the Star Trek Encyclopedia (3rd ed., p. 41), the Benzenites mentioned in DS9: "Apocalypse Rising" are the same species.

Much of the Benzite make-up has been reused. It is not always clear if the created alien is intended to be a Benzite or not, but the breathing apparatus is always absent. 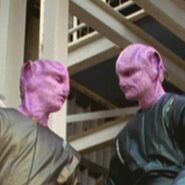 Aliens on Quarra in the Delta Quadrant
(VOY: "Workforce") 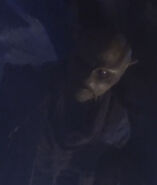 An alien on a trellium mining planet
(ENT: "The Xindi") 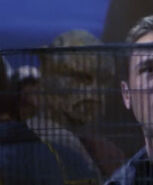 An alien on the Xanthan homeworld
(ENT: "Rajiin")
Add an image to this gallery

In 1993, Playmates Toys released a "Mordock the Benzite" action figure complete with type 2 phaser, tricorder with holster, scanner and monitor. The description on the packaging reads; "Sincere. Eager. Polite. Efficient. These social traits seem to be the bases for all geo-structures on Benzar. Mordock is well-known throughout the galaxy for his strategic planning - in particular, the Mordock Strategy, which he developed prior to joining Starfleet. He is the first Benzite to attend Starfleet Academy, and he scored in the top 1% on the entrance exams. Mordock maintains a lasting friendship with Wesley Crusher of the U.S.S. Enterprise.'"

In the The Sky's the Limit short story Acts of Compassion, The Benzite physiology is explained in more detail. It states that Benzites breathe in a gas heavy in chlorine, which is exhaled in the form of carbon trichloride and the gaseous mixture also contains essential mineral salts and lots of moisture. Furthermore, the story mentions that Benzites could go a short period of time without their breathing apparatus but prolonged exposure to standard class-M atmospheres resulted in lung damage that would eventually prove fatal.

The Pocket DS9 novel Devil in the Sky states Benzite blood is based on mercury and platinum, and takes the form of a thick orange liquid when oxidized.

Additionally, the Pocket TNG novel A Time to Sow reveals that a Benzite's average body temperature is several degrees lower than that of a Human or a Vulcan.

In the Pocket DS9 novel Avatar, Book One, Doctor Julian Bashir attempts to save the life of a Benzite named Monyodin when his alveoli are liquefied by a polymer gas in April of 2376. Unfortunately, there is little he can do due to Benzite cellular growth patterns being unique, a consequence of their engineered biology. Following the horrors of the "Organ Wars", Benzite scientists altered their race's genome to prevent organs from other people being implanted into an individual, thereby making a lung transplant impossible.

According to the novel A Singular Destiny, Benzites practice marriage though do not breed with their spouses. The person a Benzite reproduces with is not the one they spend their lives with, nor are the children in a family unit the biological offspring of the carers. To signify their marriage status, Benzites use pledge-stones, which are worn about the person. The pledge-stone is divided into halves, into which smaller stone shards are slotted. One half filled signifies the bearer has been approached, and should he or she accept they will then fill in the other half. Their partner will subsequently be given a stone for the first half in return, and will acquire the second themselves. Because marriage has nothing to do with breeding, there have never been any gender-based restrictions on courtship; same-sex relationships were always as acceptable, and common, as heterosexual pairings.

The novel Articles of the Federation develops the idea of the Benzite genetic engineering. In 2372, the Benzites argue with the Federation Council to permit them to continue with genetic engineering even though it is against Federation law to do so. They argue their current "condition" was brought about through tampering by a species known as the "Forebears" and request permission to correct the damage genetically, so they may breath in an 'M' class atmosphere. The Federation Council compromises and permits any Benzite to undergo the treatment in a one-time offer, though many choose not to.

The Benzites are also a playable race in the non-canon video game Star Trek Online, which states some Benzites choose to undergo genetic modification to remove the need for them to wear a breathing apparatus, possibly explaining Ensign Hoya's lack of such a device in DS9: "The Ship".

Retrieved from "https://memory-alpha.fandom.com/wiki/Benzite?oldid=2503172"
Community content is available under CC-BY-NC unless otherwise noted.