Damas has also guest-starred in Brooklyn Nine-Nine, Grimm, Bones, and Dexter and also voiced characters in King of the Hill. 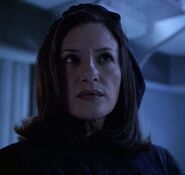